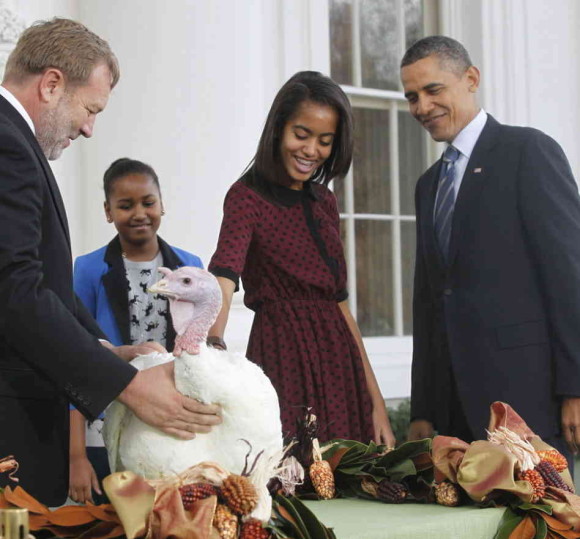 Some good news for families heading into the Thanksgiving Holiday. The cost of the average Thanksgiving dinner should decline slightly as compared to last year:

The average cost of a full turkey dinner for 10 people will be $49.04, which is 44 cents lower than a year ago, according to an annual survey by the American Farm Bureau Federation, a trade group. Last year’s tally of $49.48 was the highest in the 28-year-old survey’s history.

Cheaper turkeys pulled down most of the cost — a 16-pound bird costs $21.76, about 50 cents lower than last year. Sweet potatoes, whipping cream and pumpkin-pie mix will set you back a bit more this year, but cranberries, dinner rolls and cubed stuffing won’t.

The survey recruits volunteer shoppers who scout for economical prices without using coupons or special deals. The ingredients of the meal — which haven’t changed over the years for comparison’s sake — also include pie shells, milk, peas and other vegetables.

The American Farm Bureau compiles the data using the same ingredients, as indicated above. Here’s their list for 2013: 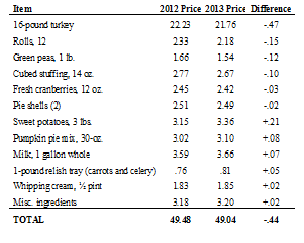 A slight decrease in the cost of Thanksgiving should be welcome. Of course, we are still feeling the effects of the biggest one year hike in Thanksgiving dinner prices, which was in 2011. As I’ve discussed here on occasion, the price of food increases along with other commodities with inflation. Food, fuel, education, and health care costs rise the most as money is printed by the Fed in an attempt to stimulate the economy by stoking “mild” inflation.

However, other major factors which influence food prices include over-regulation and subsidies for farm products. Indeed, when the money supply is artificially increased, regulations are added to every year, and markets are distorted by subsidies (which requires debt to fund), food markets will remain distorted.

(Side note: If you have the means to help your fellow neighbor this Thanksgiving, I urge you to consider doing so. Private charity is the only true charity and relies on our support. Here’s one way to find your local food bank.)

After Thanksgiving dinner (barring any unfortunate butt fumbles), people will be able to go shopping as early as the evening of Thanksgiving Thursday (or even earlier in a few places) in advance of “Black Friday.” The name Black Friday has its roots in store owners going from red ink (loss) to black ink (profit) during the Christmas and holiday shopping season. Retailers last year pulled in $11.2 billion on Black Friday and are expecting to pull in anywhere from 2.4% to 3.9% more this year.

This metric will be closely watched by pundits so they can divine if the American consumer is “back” or “dead,” depending on if the results are met, exceeded, or fall short. Of course, as many point out, this is somewhat silly because of the rise of mobile shopping. People can shop from the comfort of their couches while sipping seltzer and trying to aid the digestion of their large Thanksgiving meal. This means they can also avoid the crowds. While some sadists enjoy the experience, others may be just as content to save money from home and avoid the crowds.

In 2012, we saw a big boost in mobile shopping on Thanksgiving Day:

We can expect the same in 2013 — on Thanksgiving Day, Black Friday, over the weekend, and on Cyber Monday (the Monday after Thanksgiving).

The irony of the Black Friday pandemonium is two-fold. For the consumer, many of the better deals are actually closer to Christmas (or even after, before New Year’s Eve), as retailers make further cuts to try and squeeze the last bit of profit before the end of the year. For the retailer, trying to lure the consumer into the store on Black Friday won’t necessarily increase sales, but is more likely to pull sales into November from December.

Much like money (Quantitative Easing), you can’t print or otherwise conjure up sales. Maybe we should call the Black Friday shopping season “Quantitative Selling?”

We have a short week this week and the major focus will be on retail sales, which will begin to trickle in late Friday, and then on Saturday and Sunday. Jobless claims (300k) and durable goods orders will come out on Wednesday as well.

Have a great Thanksgiving week. I hope all of my readers have many blessings for which they are thankful. I am blessed to have many faithful readers, among many other things this year. Sound off in the comments about what you’re thankful for this year. Once again, thank you all!