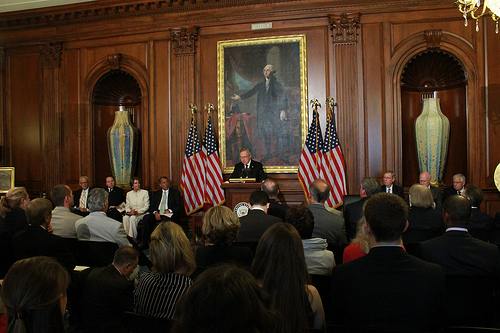 The Senate has exercised the “nuclear option” and some filibuster usages are no more. Conservatives shouldn’t shed a tear over this development. The framers probably would have wanted it this way.

I certainly acknowledge that Harry Reid is a total hypocrite on this issue and that it is a blatantly political move. But the first is par for the course for our illustrious Majority Leader, and the second only goes to show that the Democrats are usually better at politics than Republicans.

In the short run, it could help to distract from Obamacare, though the problems with that legislation are so unending that the distraction won’t last long. It may also serve to allow the president to pack in a few federal judges that will leave a judicial legacy long after he is gone. But in the long run, the move evens out. Republicans can use the rule to their advantage as much as Democrats do. And the Senate may be able to get back to filling one of its constitutional roles: advising and (usually) consenting on presidential appointments.

As The American Spectator’s Ross Kaminsky has said well, “The founders did not intend ‘advice and consent’ to make the Senate co-equal with the president regarding who got to fill positions where the president makes an appointment.” As he goes on to say, this role is intended to be “a check on the president to ensure that he does not nominate out of nepotism, cronyism[,] or for another unethical reason.” Furthermore, it should check judges whose views are clearly unconstitutional.

Still, there is no reason to suggest that this check and balance was intended to allow 41 judges to hold up approval of a presidential appointee. If so, where is the constitutional power to filibuster? It does not exist. It is a traditional parliamentary rule that has been exercised in varying degrees in various circumstances throughout British and American constitutionalism. For the last thirty, it has been abused.

The holdup in confirming three D.C. Circuit Court judges is the ostensible reason given for the rule change. Although the most common example of the failure to advise and consent a perfectly-qualified candidate to that same circuit is Bush nominee Miguel Estrada (popular largely because he was the first to be actually defeated by a filibuster) — this practice got out of control in the 1980s, when it was first used on Reagan nominees.

Since then, as Jonathan Adler of National Review aptly sums up, “Each side has participated in an escalating game of tit-for-tat, making it progressively harder to fill vacancies on the federal bench and even to attract qualified nominees.”

The conservative statesman Burke would point out, Congress should have the ability to reform when necessary. The rule should be used when it is necessary and proper to fulfill the constitutional role prescribed. When it distorts or undermines it, it should be reformed. To preserve the role to advise and consent, the power to block by filibuster should go in some cases.

The rule change excluded Supreme Court nominees and legislation – they can still be filibustered. Justices with profoundly unconstitutional views can be stopped. Rand Paul can still talk until late hours about drones. Conservatives can breathe a collective sigh of relief. It won’t be a long-term disaster. It will probably be a long-term improvement.