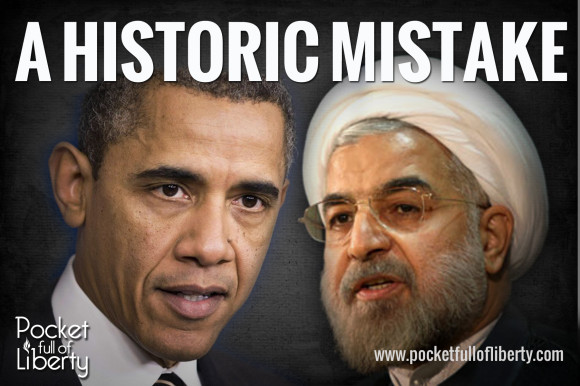 In his unforgettable 1964 speech, Ronald Reagan conveyed some wisdom that applies perfectly to the deal struck with Iran regarding its nuclear program. Reagan said, “there’s a risk in any course we follow other than this, but every lesson of history tells us that the greater risk lies in appeasement, and this is the specter our well-meaning liberal friends refuse to face — that their policy of accommodation is appeasement, and it gives no choice between peace and war, only between fight or surrender.”

That is the real choice that the Obama administration has left us with Iran by agreeing to this deal in Geneva.

There are several people that have declared this deal a good step towards peace and any opposition to it as equivalent to promoting war, but in reality this deal makes war far more likely.

Let me explain what some people seem to not understand about the situation.

First, Iran is indisputably the largest state sponsor of terrorism in the world. The Iranian Revolutionary Guard has a hand in training and funding terrorist activities all over the world, including those that have led to American deaths.

Second, the United States policy until now has always been aligned with Israel in that we believe a nuclear Iran is an unacceptable outcome with horrific consequences. In real terms, this deal changes that. This deal essentially signals that our primary concern is stopping a strike on Iran, not stopping a nuclear Iran.

Why is the deal more likely to lead to war?

While the United States has always said it is unwilling to accept a nuclear Iran, it has also looked for a path to stop Iran from getting nukes without a military strike. The path we chose — which has been the policy of the United States for years now — relied on using our resources to impose sanctions and freeze Iranian money in order to apply pressure on the country to stop nuclear activities. The idea was to make these sanctions have a large enough effect that the Iranian regime would have no choice but to abandon the program in return for economic incentives.

While the regime has continued to pursue weapons, the fact that they are even coming to the table shows that this policy was making an impact. The Iranian population is tired of the miserable economic situation that the regime has created as a result of its endless pursuit of a nuclear weapon.

However, a regime that promotes the killing of innocent women and children and is willing to let their own people suffer will not easily abandon their desire for nuclear weapons.

A lot of people worked very hard to get sanctions and UN resolutions against Iran, which required putting an unbelievable amount of pressure on countries that are not really interested in stopping Iran from acquiring nuclear weapons. This deal essentially reverses all of that work. Even on paper, this deal requires a very temporary pause in enrichment activity in return for severe relief from the pressure we spent years building. Iran realizes that there is very little chance these sanctions will be put back in place when this agreement fails to lead to a permanent solution 6 months from now. To put the sanctions back in place, we would have to gather support that was nearly impossible to get the first time around and the Obama administration would need to acknowledge that their deal was a failure (something they are unwilling to do on any subject).

Furthermore, it will be impossible to take back the released financial assets, which will surely be used to support further terrorist activities. More importantly, the reality is that there is no enforcement mechanism for this deal. The Iranian regime, which has consistently lied and violated international agreements, cannot be trusted to uphold their end of the deal.

What happens when we suspect they are hiding parts of their program or they restart enrichment at levels above 5%? Nothing, and they know it.

The United States has given up our only leverage against Iran, which leads to only two options: (1) either we accept Iran becoming a nuclear power and the catastrophic consequences that go with that or (2) we go to war to stop it. Since Israel cannot allow for a country that constantly threatens its destruction to get a nuclear weapon, they almost certainly will have to go with option 2. If they do that, they will be condemned by the world, as they were when they destroyed the Iraq nuclear reactor in 1981. Iran will surely retaliate, likely using Hezbollah. The United States, if this is still the country I believe it to be, will be forced to do the right thing and support our ally in what will likely become an even larger war.

The only deal that is acceptable is one with the precondition that Iran stops all enrichment. Otherwise, all of our work until now was pointless.

This deal ensures the choice between war and a far more dangerous world. It destroys the work that countless Americans have done to try to prevent those very things. This wasn’t a small step towards peace — it was a historic blunder. Our only hope, and it is not much of one, is that Congressional Democrats put what is right above their support for this President and help kill this deal by passing additional sanctions.