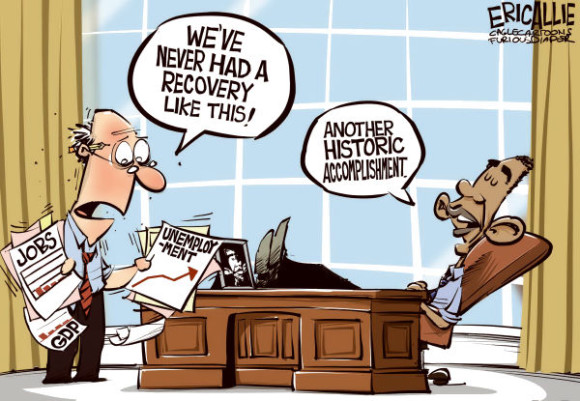 Certainly the economy today is better than it was in 2008, 2009, or 2010. Any time companies are adding private sector jobs, it’s a good thing. At the same time though, the recovery has skipped over a lot of folks. Food stamp enrollment is at record highs. Unemployment is still a major concern. Welfare and disability rolls are swelled. Remember, the recession “officially” ended in June 2009. We are coming up on five years post-recession, but the average American still feels that the economy sucks.

When it is convenient the partisans will cite to the record-levels in the stock market and anemic GDP growth as evidence that the economy is getting better. For whom is it truly getting better though?

Corporate profits are at a record, particularly in industries who are receiving the benefit of cronyism.

Institutions who have been deemed to be “too big to fail” are bringing in record profits. This is not a free market working, but entities leveraging a government (i.e., taxpayer) backstop to the logical extreme. We have seen how this ends.

Health insurance corporations are the biggest cronies of them all.

In particular, health insurance companies are reaping in record profits due to their new base of customers thanks to the ACA. On the surface, many on the Left may think that Obamacare is great for permitting more folks to get insurance. This is the story we were told. The reality is that most are opting for the expanded Medicaid, even when subsidies for Obamacare plans are available. Moreover, the insurance companies are only really able to offer these plans because of the government subsidy and insurer risk corridor bailout, which protects them and (essentially) makes the insurance companies too big to fail.

The “real” unemployment rate, particularly among African-Americans, is depressingly high.

I wrote earlier this month about the “real” unemployment rate, which is much higher than the reported 6.7% because the U-3 — the unemployment figure used by the Department of Labor — (1) does not include folks who are “marginally attached” to the workforce (i.e., working part-time when they really want a full time job) and (2) those who are discouraged or have otherwise given up looking for work. Essentially, we have double-digit unemployment in America due to the number of folks who have simply become so discouraged that they cannot find a job — or are working part-time when they really want to work full-time but cannot find a full-time job. This is a depressing statistic that affects the American economy on numerous levels. I set forth a few examples of this here. But there are psychological effects, decreased tax revenue, increased social welfare costs, etc.

At least one major African-American leader has commented on this depressing trend:

Now let me get back to the point that I was trying to bring out about the economic problem. And that is one of the most critical problems that we face in America today. We find in the other America unemployment constantly rising to astronomical proportions and black people generally find themselves living in a literal depression.

The unemployment rate on the basis of statistics from the labor department is about 8.8 per cent in the black community. But these statistics only take under consideration individuals who were once in the labor market, or individuals who go to employment offices to seek employment. But they do not take under consideration the thousands of people who have given up, who have lost motivation, the thousands of people who have had so many doors closed in their faces that they feel defeated and they no longer go out and look for jobs, the thousands who’ve come to feel that life is a long and desolate corridor with no exit signs. These people are considered the discouraged and when you add the discouraged to the individuals who can’t be calculated through statistics in the unemployment category, the unemployment rate in the negro community probably goes to 16 or 17 percent. And among black youth, it is in some communities as high as 40 and 45 percent.

This is an excerpt from Dr. Martin Luther King, Jr.’s “The Other America” speech. I don’t suggest to know what Dr. King would have said with respect to Obama’s policies. Nor am I suggesting that Dr. King was a Randian capitalist. Moreover, American society today is much more civil and improved than in the late 1960s. Polls demonstrate this sentiment.

So the comparison is not apples-to-apples. But I will say that the state of unemployment, particularly with respect to the African-American community, is statistically and numerically as big of a problem today as it was then.

Though many on the Left defended Obama leading up to his 2012 re-election, it seems as though even the most faithful are frustrated with the state of Obama’s economy.

The one thing that is clear: President Obama’s policies have failed the majority of Americans. The sooner folks will admit this, the sooner steps can be taken to rectify the mess we’ve been put in.

The U.S. markets are closed in observance of Dr. Martin Luther King, Jr. Day on Monday. On Tuesday, expect earnings season to continue to dominate the headlines. Initial claims will come out Thursday (projected at 330k).