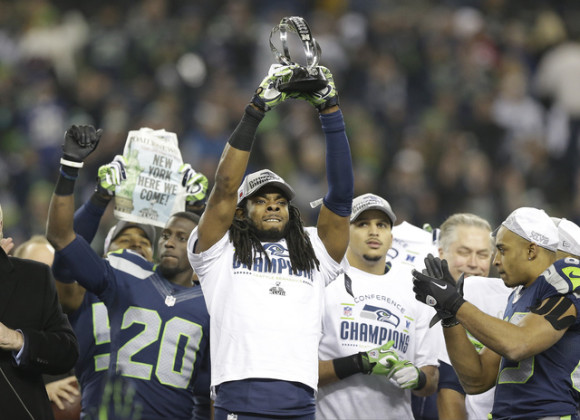 I have no idea why I felt this intense need to defend Richard Sherman but there I was, two minutes after a stunned Erin Andrews threw it back to the boys in the booth, giving my two cents on social media (Like everyone else in America, I might add).

I’m not a Seahawks fan. I’m not a Sherman fan, and I am certainly not a Pete Carroll fan. I had no dog in this proverbial fight so I sat there wondering,

“Why do I even care that everyone is ridiculing and persecuting this dude? Why am I not jumping on the bandwagon of discussing how he was so allegedly classless and ridiculous with his yelling at the camera and alleged lack of control and running of his mouth”?

Honestly, why did I care at all?

Maybe I felt a kinship with this guy who was unafraid to speak his mind and express how he felt. Maybe I respected a man who could give his honest and genuine opinion, not say the same clichéd things that have become the boring fodder of most post game interviews.  We’ve somehow turned into this society that demands people to respond and react how we want them to or how we think that they should.

We pick which sins we think are forgivable and which people we should continue to dislike and hold grudges against. This person should be given a second chance because hey, people make mistakes. But that guy involved in that scandal? No way. He needs to pay for that mistake for the rest of his life. Nowhere is this more obvious to me than in professional sports.

Many golf fans will tell you how Tiger Woods should be off the hook for his various deviances but we should totally continue to hate Michael Vick, even after he paid for his sins and served his sentenced jail time. Barry Bonds should absolutely be allowed in the Major League Baseball Hall of Fame cause hey, everyone was doing the same thing. He just got unlucky and got caught. But that Riley Cooper football playing punk? We should just lynch him for the racial comments he made one time at a concert last year.

In an ironic twist, the same people who criticized Riley Cooper for his racist comments this past summer are somehow now the ones making comments about what a “ghetto thug” Sherman “from the hood” is for how he handled his post game interview.

Call me crazy (and some might) but I’m a little confused here. Which side of the fence are you on?  It seems whatever actions that offend us most are the ones we refuse to let go of.  The other “questionable” things people do that don’t strike that nerve in us, well we’re ok with overlooking those and moving on.

Life is all about second chances after all, right?

Do I agree 100 percent with how he answered? Not necessarily. Hindsight is always 20/20 and there are several times I know I’ve answered a question and then immediately regretted my response. Sometimes words or thoughts don’t always come out the way I intended and I’m just thankful a camera wasn’t in my face, with millions of people watching and judging me and who I am as a person, based on one sound bite.

Does Richard Sherman regret what he said? I’m going to go with a confident “No” on this one, but only he knows. But I hope he doesn’t ever regret answering a question honestly and genuinely. If he really feels like he’s the best corner in the game then ok, he has a chance to prove it in two weeks at the Super Bowl.

If he and Crabtree had words and there was some rivalry going on there, then so be it. We don’t know what was said out there between the two of them on the line of scrimmage. It’s called trash talk, people. It’s what makes the sports world go round.

The football field is like the hard knocks classroom of life.  As it is with most moments in sports, there’s always some applicable life lesson that can be drawn out of it. There’s so many ways in which a game parallels real life.  This whole Sherman debacle made me think about how so often in our lives, we ask a question but in our minds, we already have an idea of what we want the answer to be.

If a woman asks her husband if that dress makes her look fat, and he honestly answers “yes”, we all know that dude is sleeping on the couch for the next 2 weeks. How many times has someone asked your advice about a situation and then gone and done exactly the opposite of what you said? Often when we ask people for their advice and opinions, really we are saying, “Give me the response that I think you should give me and if it’s contrary to that, I’m either going to be upset, offended or disregard it and do what I want anyway”.

We aren’t comfortable when someone doesn’t agree with us or see it from our side of the fence. We don’t know what to do or how to act and we somehow feel like we’ve been personally attacked. (Moral of this story: don’t ask Richard Sherman a question unless you can handle the truth. And based on the backlash, most of America can’t handle the truth).

So forgive me if I find it incredibly refreshing that for once, an athlete didn’t give the same ole beauty pageant answer that we’ve all grown so accustomed to hearing.  Erin Andrews wasn’t interviewing Miss Congeniality. She was talking to an elite athlete who had just made one of the biggest plays of his entire career and moments prior had punched his ticket to the Super Bowl.

He got a little excited. So what? Sherman didn’t cuss and use inappropriate language; he didn’t fumble over his words or ramble on. He spoke his mind and responded in a way he felt was conveying his truth. He was unapologetically authentic and real. Last time I checked, those things weren’t considered to be character flaws.

For those still not convinced, don’t worry. I’m not trying to become the next president of the Richard Sherman fan club. I’m not going to jump on the Seahawks bandwagon and buy a t-shirt declaring me the 12th (wo)man. I’m not even trying to tell you that you should like the dude.

However, I was intrigued enough by this controversial guy to take a few minutes out of my day to Google his name. And what do you know?

His story is pretty inspiring.

Raised in Compton by his father who was a garbage collector, and a mother who works with disabled kids, he graduated with honors from high school and chose to go on and play football at an Ivy League school because of its academic reputation. His charity, “Blanket Coverage,” provides school supplies and textbooks to underprivileged kids so they can have the same academic advantage as their peers in safer, more affluent neighborhoods. He’s worked hard to get where he is and has given back to his community in ways that most of us never have or ever will.

So please, tell me again how classless and ignorant and ungracious this monster is.

And to the man of the controversial hour, I say this: Mr. Sherman, if this whole football career thing doesn’t work out for you buddy, you still have that communications degree from Stanford to fall back on. I don’t know too many “ghetto thugs” “from the hood” that have those hanging on their wall at home…