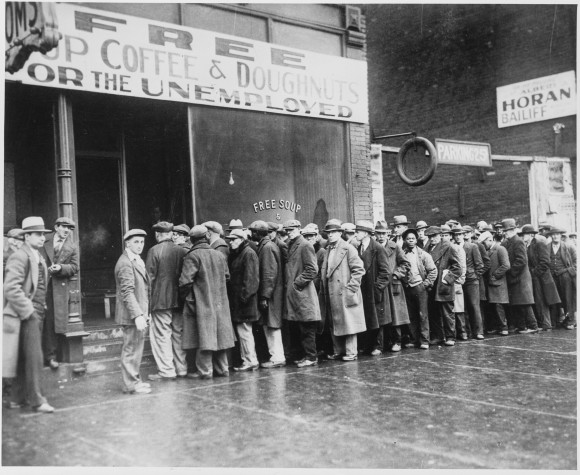 Democrats are going all in with the class warfare gambit in 2014. From raising the minimum wage to the new push to extend long term unemployment insurance, they’re following the playbook (as I outlined here) to the letter. The first step was making “income inequality” an issue. The next step is using that as a background to push for vote buying schemes. Today, they’re focusing on extending unemployment insurance and using a number – 200,000 new jobs in 2014 – to make their case.

Where did they get this number? The Congressional Budget Office (CBO) was asked by Congressman Chris Van Hollen (D-MD) to estimate the impact of extending the benefits. This request generated a letter from the CBO stating the following:

Combining the positive effects on the economy from higher aggregate demand with the negative effects from job searches that would be (on average) less intense, CBO estimates that extending the current EUC program and other related expiring provisions until the end of 2014 would increase inflation-adjusted GDP by 0.2 percent and increase full-time-equivalent employment by 0.2 million in the fourth quarter of 2014.

Now, if you actually read the entire letter – which Democrats assume, correctly, most people won’t – you’d know that there are massive caveats surrounding this estimate. And, of course, the media isn’t very eager to put the estimate into any context. They’re more than happy to simply report what Democrats are saying (and citing that it’s from the CBO) and leave it there. Why bother informing the public?

If we had a real media in this country, the reports would include the caveats, but we don’t have a real media in this country. We have mainly a bunch of left-leaning know-nothings pretending to be reporters and actual Democratic operatives pretending to be analysts who make sure these numbers do what Democrats want them to do: lend legitimacy to their laughable polices.

Here’s what the CBO actually says about this 200K number:

What the CBO is saying is that these estimates (the 200K number) are based on the assumption that federal spending boosts aggregate demand – all things being equal. You and I know that our economy is very complicated. Anything can change at a moment’s notice. But if absolutely nothing else happens between now and the end of 2014, the estimate is that 200K jobs will be added by the extending the benefits. I’m not even going to get into the methodology the CBO uses because that’s an entire debate about the validity of Keynesian multipliers and other macroeconomic theories. Bottom line is that the CBO bases these estimates on theory, not solely on historical data.

Anyway, the key point in this caveat (that Democrats fail to mention, conveniently) is that there’s actually a very wide range of potential job creation estimates. There can either be nearly no job creation or there could be up to 300K jobs created. But that doesn’t bolster the Democrat narrative. It’s hard to get people to rally behind you in support of what is essentially the roll of the dice. So you basically say “Hey! This is guaranteed to come up seven!”

That is not what the CBO said. But Democrats are claiming it is:

“…actually creates new jobs.” No, Mr. President, it might create new jobs, based on assumptions made by the CBO.

And here are some of the assumptions:

CBO estimates that extending emergency unemployment benefits would raise gross domestic product (GDP) and employment in 2014 relative to what would occur under current law. Recipients of the additional benefits would increase their spending on consumer goods and services.

That’s a pretty big assumption. Would they increase spending? Or simply spend what they were already spending before the benefits ran out? We don’t know.

That increase in aggregate demand would encourage businesses to boost production and hire more workers than they otherwise would, particularly given the expected slack in the capital and labor markets.

Would it? Says who? Where’s the data to back this up?

The CBO does let slip some of the negative effects of long term benefits:

However, those positive effects on output and employment in 2014 would be partially offset by the effects of an increase in the duration of unemployment for some people. Specifically, in response to the extension of benefits, some unemployed workers who would be eligible for those benefits would reduce the intensity of their job search and remain unemployed longer—which would tend to decrease output and employment.

But they make a quick recovery with – you guessed it – more assumptions:

No data, of course. Just theory. Assumptions. Now, you may be asking “Isn’t the first assumption above also just theory?” No, that has actually been researched and shown to be the case with data. Ask Paul Krugman. Well, not the current Paul Krugman, the one from before Obama.

Progressive policies started this mess we’re in and now they’re pretending they’re going to fix it with stuff that won’t actually fix it. It’s all about staying in power and buying votes. It is fraud and no one is calling them out on it. Who is going to step up and explain this to the American people?

Debbie Wasserman-Schults is going around saying that extending the benefits “grows the middle class” based on this CBO report. This is a fraudulent claim. How is she being allowed to get away with it? How is this fraud not news?