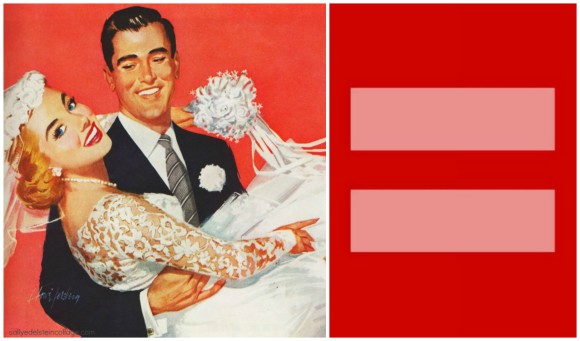 Everyone should be treated equally under government. That includes marriage. Churches can do what they want, but govt….NO.

to which I replied

This set off a string of tweets back and forth. Before too long, the “argument” descended into this:

Attacking my motives is when I decided it wasn’t worth discussing any further on Twitter (you can click those links and follow most of the conversation if you want). The issue is contentious and, sadly, it can rarely be discussed these days without it devolving into into this kind of tone (something Neal Dewing is going to address in a separate post).

I’ve made my position on gay marriage known for quite some time: I am personally opposed to it. I don’t think it is a protected constitutional right nor do I believe it is an equal rights issue. If states legalize it, that is not an issue with me and I supported the Supreme Court striking down the portion of DOMA that took into consideration states that had legalized marriage.

We live in a representative republic. People are elected to represent their constituents in statehouses and the Governors mansions around the country. If those elected officials choose to legalize gay marriage, then the voters can determine whether or not they want to elect different people who repeal those laws. That’s our system and it works beautifully, if not always perfectly.

“Marriage equality” has become quite the catch phrase in the last couple of years. But it’s not really about equality when all is said and done. Let’s examine my home state of Georgia and what is required to have a legally recognized marriage. Note for the record that I am not anywhere close to be being an attorney and I’m not going to attempt to make any grand legal arguments here. I’m merely stating the “equality” argument doesn’t hold up under scrutiny when looking at it from logical viewpoint.

If you’re an 18 (or 16 with parental consent) year-old heterosexual male or female, you have the right to marry any person of your choosing who happens to be of the opposite sex and not a close blood relative (sibling or parent — though first cousins can marry — more about that soon) and who is not already married. Guess what? An 18-year-old homosexual male or female has the same rights.

The gay proponent will say, “Hold on a second. But he can’t marry another man.” That’s true. But neither can the heterosexual man.  So where is the lack of equal protection?

At this point, the issue of race is usually brought into the discussion. It’s a tired, lame and intellectually lazy rejoinder and really nothing more than an ad hominem attack. “Well, then I guess you support laws that ban interracial marriage you racisty racist!” (They don’t say the racisty racist thing but it’s implied) Actually, I don’t, because race has nothing to do with sexuality. If a black man is prohibited from marrying a white woman in the state of GA, then there are equal protection violations. To say that one man can marry a woman and another man cannot violates the equal protection clause under the constitution.

Finally, a variation of the following is offered up: “The government shouldn’t prohibit people from marrying somebody they love!”

To which I say: Grow up. That kind of thing sounds like breathless teenagers defying their parents. “We’re in love and you can’t tear us apart!”

This is nothing but an appeal to emotion and on top of that — it’s false. The government already prohibits marriage in a number of ways, meaning they’re prohibiting people in love from getting hitched. And I don’t see anybody beating down the doors to make those changes. So what are those prohibitions? They include:

1. Age — In most states, marriages are legally recognized at the age of 18. However, in Nebraska and Mississippi, people as young as 17 can acquire a marriage license without parental consent.

2. Number of spouses — Polygamy is illegal in all 50 states.

Naturally, I don’t see people all over Twitter, Facebook, blogs, or anywhere else fighting for the oppressed first cousins in WA or IA who are being subject to unequal protection. Apparently, activists and gay married couples in Washington and Iowa don’t care as much about “marriage equality” as they claim.  Nobody is standing up for the brother and sister who love each other to the point they want to be joined in holy matrimony. There aren’t well-funded organizations coordinating campaigns to end the discriminatory practice of people marrying more than one person.

It would be interesting to see if somebody could answer that question.

That being said, for the most part, the legal battle over gay marriage has already been won. Still, making the case in states like Texas, Georgia and South Carolina will be much more difficult. In the end, I truly believe gay marriage proponents would do much better to make their case under the banner of economic freedom and liberty: visitation rights at hospitals. Jointly purchasing property. Enforcement of wills and estates. Tax benefits. Healthcare benefits. Spousal privilege. The list can go on.

If one chooses instead to make it all about “love” and “equality,” then people had better be prepared to bring to the table an argument that is better than a variation of “you’re nothing but a homophobic bigot.”