In Georgia, a young woman graduating from high school found herself in some trouble for inserting a veiled, rather crude message in her senior quote. It has all the earmarks of a too-clever-by-half high school senior:

Did you catch it? The symbols for those elements on the periodic table spell out, “Ba-C-K Th-At As-S U-P.”

Paris Gray, a class vice-president, received an in-school suspension and would have been banned from participated in her upcoming graduation. The school has since relented, and life goes on.

It made national news. The Internet reactions were mixed, as they typically are, but most of what I read came down squarely on the side of Miss Gray.

“Can’t these people take a joke? This is no big deal! Are we a nation of sissies?” That sort of thing.

I humbly submit that the school acted properly, well within their right to govern the behavior of a student in their charge. This episode is a net positive for society, and for Miss Gray. I am perhaps uniquely qualified to comment for…

I Was a Teenage Yearbook Vandal. 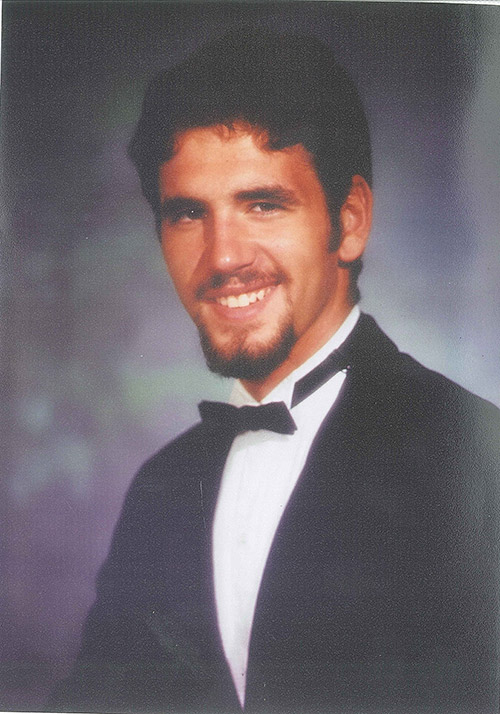 When I began my senior year at a small, rural private school, I had a deserved reputation as a no-goodnik. I tested the boundaries of the dress code, the grooming requirements, and the headmaster’s patience. I was a poor student, apathetic and prone to cutting class to wander the breezeway (we didn’t have halls). I wore a trenchcoat to school (it was an awkward phase) and lined my pockets with purloined snack food from the lunchroom. I would often climb onto the roof of the school to literally look down on my classmates.

Despite this, by senior year I had begun to feel a bit disconnected from my peers and decided to get involved in a club. I chose the Yearbook Committee. I was cautiously welcomed to the project by the faculty.

Using my position as a copy editor and photo cropper, I was able to insert an anagram into my own senior quote. As anagrams go, it possessed all the wit and intelligence of Miss Gray’s little concoction above, with more vulgar language.

That is to say, it was a telegraphed punch.

“Surely these rubes will never catch on to my spectacular genius,” I thought as we wrapped up the yearbook project in the winter semester, and sent it off for publishing. I was wrong.

Months passed, and I forgot the entire thing. I had other bridges to burn, other skirts to ruffle. I’d even started to get a little serious about my impending ejection from cosseted classrooms into real life. But a funny thing happened as graduation closed in: the yearbook actually came out, and there was my quote.

“Oh, sh*t.” I remember saying as they passed out the glossy, expensive yearbooks in the gym. For suddenly I realized that not only was my little game not as funny as I had originally thought, but the meaning of my message was also glaringly obvious. I may as well have not bothered with the anagram at all.

Sure enough, the administration puzzled it out quickly and the hammer came down. I was suspended for the last two weeks of school, and very nearly expelled. The decision rested with the board, which was not impressed with my record. Only the intervention of the headmaster and dean, along with a statement of sincere contrition on my part (not easy for an eighteen-year old) spared me consequences I would have been unlikely to overcome. I was even allowed to walk at graduation, and after this you may have guessed that I calmed down somewhat.

Circling back to Miss Gray and her situation, she should be very grateful that the consequences were mitigated. Her public statement that “Back that ass up,” means something other than what everybody knows it means is an obviously poor excuse for her actions. Still, she seems like a good kid with some smarts, and it would be a real shame to thwart her ambitions so early in life.

Yet she deserved some consequences, and I believe the school acted appropriately at every step in this process – including their decision to relent.

One of life’s crucial lessons is that our actions affect other people, and ourselves. Defacing a yearbook may seem a small thing, but it isn’t just about the yearbook. It’s a mark of profound disrespect to vandalize something that other people have put work into. It’s a sign of immaturity and heedlessness that can, if not checked early, develop into poor character that will touch on every aspect of life. I learned that when I almost went completely off the rails for something so comparatively minor, and I’ve held onto it.

It is a responsibility of schools not just to give young people knowledge from books, but attempt to inculcate them with a bit of wisdom along the way.

Ideally parents would do the lion’s share of this formation, but it is at school that young people are faced with those who do not love them, yet have expectations of them. Learning to navigate this world begins in the (hopefully) controlled environment of school, whether public or private.

Yet the world is not heartless, nor should it be. We’ve seen the folly of school zero-tolerance policies. People should have a chance to be redeemed, if they demonstrate that they are willing to do the work.

Miss Gray no doubt privately evinced the proper regret for her actions, which were after all the actions of a high-schooler. I’m thankful that in her situation, as in mine, there was a final measure of forbearance shown. There might not have been, and I haven’t taken that for granted in my adult life. I hope she doesn’t.

Sincerest congratulations, Paris Gray, from one yearbook vandal to another. The unpleasantness is past, but don’t forget what you’ve learned from it.