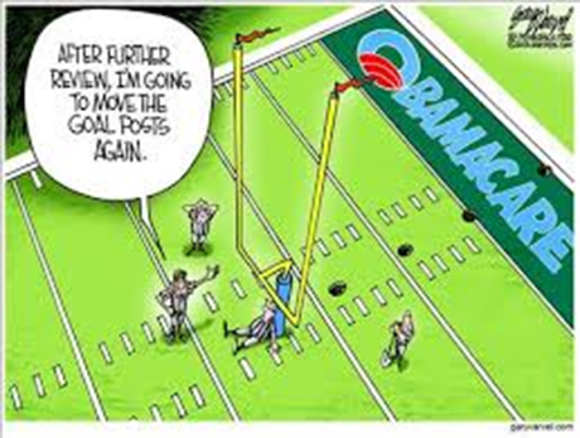 Between moving red lines and Obamacare goals, this administration has more rollbacks than Walmart.

“First of all, 7 million was not the administration,” Sebelius told Huff Post Live in an interview Tuesday. “That was a CBO, Congressional Budget Office prediction when the bill was first signed. I’m not quite sure where they even got their number. Their number’s all over the board, and you know, the vice president has looked and said it may be closer to 5 to 6. I’m more interested in what we are doing today: getting the word out to target populations.”

Last June, according to the Washington Post, Sebelius told reporters, “We’re hopeful that 7 million is a realistic target.”

It’s a number the Health and Human Services secretary reiterated to NBC News in September as well.

“I think success looks like at least 7 million people having signed up by the end of March 2014,” she said.

The White House seems to have shifted its opinion on the enrollment numbers after Obamacare got off to a slow start when glitches and malfunctions plagued the website. In December of last year, White House aide Phil Schiliro made the claim 7 million was never a target number.

The Obama Administration:  Misspeaking since January, 2009.  At least they blamed someone other than Bush this time, so there’s that.