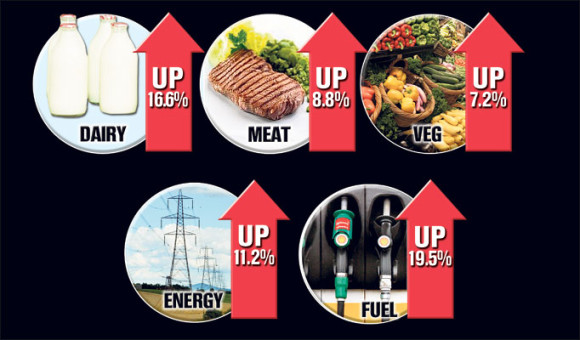 Recently, President Obama and those on the left have been really pushing the whole “living wage” idea. Obama focused on this as part of the State of the Union address and he used his executive might to direct the executive branch to pay federal contractors a minimum of $10.10 per hour, though this was a largely token maneuver. The theme as of late has been to focus on the fast food industry and other companies that hire unskilled labor and tell them that — “for the greater good” — they should pay higher wages.

The left never focuses on the fact that government interference in the free market raises prices.

I have discussed the minimum wage at length here and on Twitter, as readers of this column likely know, along with other authors at Pocket Full of Liberty. Amy Otto has also opined on the minimum wage with her excellent post that stresses the fact that is missed by many on the left (unintentionally or otherwise): minimum wage jobs are really supposed to be temporary or stepping stones — not lifetime careers.

The latest tactic by the left is to tug at people’s emotional heart strings by pointing out the “fact” that people who make the minimum wage live in “poverty.” This is completely false, in the technical sense, though it may be true in other senses. Let me explain what I mean by this.

The federal poverty line is defined by the United States government. In 2014, the poverty line sits at $11,670 for an individual. It’s not a lot of money. That is indisputable. However, the line of argument from the administration that people who earn the minimum wage are under the poverty line is simply incorrect.

An individual making $14,500 per year is technically above the 2013 poverty line ($11,490) and above the 2014 poverty line ($11,670). This assumes that the federal minimum wage ($7.25) does not include (1) government tax “refunds” like the Earned Income Tax Credit (particularly for married folks or individuals with children) and (2) personal exemption/standard deductions, which when combined effectively excludes $10,000 in 2013 income from taxation.

Indeed, it is disingenuous at best (and false at worst) when the left claims that those making the minimum wage are below the poverty line. This is simply inaccurate. Zero Hedge did an excellent post that demonstrated that a family of four earning minimum wage had more disposable income than a family of four earning a “living wage” of $60,000. This disincentive to work is nothing new and has become something highlighted recently by the Obama Administration’s lauding of the CBO report that determines over 2.5 million people will likely quit their jobs because they can “earn” more by not working in terms of Obamacare subsidies (and other welfare programs).

One of the main problems with raising the minimum wage is that it increases prices. Fast food companies, for example, would raise the prices of their food to make up for the increased costs (as they always do).

Fuller projected that raising the minimum wage to $10 an hour would result in the loss of 11,502 jobs. He said his analysis does not take into account the recent actions in Montgomery and Prince George’s counties to raise the minimum wage in those jurisdictions to $11.50 an hour by 2017.

David J. Norman, president of DavCo, which operates more than 150 Wendy’s fast-food restaurants in the region, said that he anticipated having to close 10 to 15 locations in Maryland if forced to pay a higher wage at the same time the company is facing increased health care costs under the new federal law.

Larry Stottlemyer, founder of Adventure Park USA in New Market, said he would not be able to hire as many teenagers to work at his amusement park if the minimum wage increases. “I just can’t absorb that kind of money,” Stottlemyer said.

With this in mind, it’s important to note the following: those on the left focus on the wage aspect of the poverty issue in America, but never seem to focus on the other end of the spectrum – prices. More dollars chasing goods and services raises prices. This is basic economics.

Following its meeting in January 2012, the FOMC issued a statement regarding its longer-run goals and monetary policy strategy. The FOMC noted in its statement that the Committee judges that inflation at the rate of 2 percent (as measured by the annual change in the price index for personal consumption expenditures, or PCE) is most consistent over the longer run with the Federal Reserve’s statutory mandate. Communicating this inflation goal clearly helps keep longer-term inflation expectations firmly anchored, thereby fostering price stability and moderate long-term interest rates and enhancing the FOMC’s ability to promote maximum employment.

The four areas that price inflation most typically appears in are food, fuel, health care, and education. 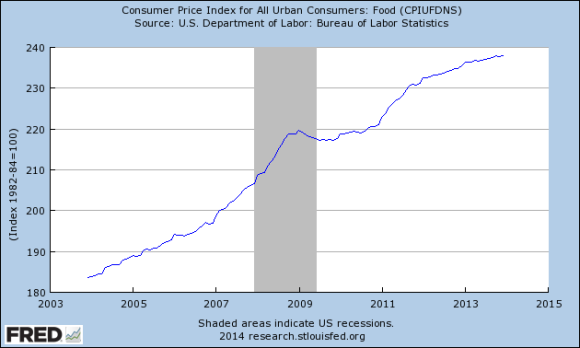 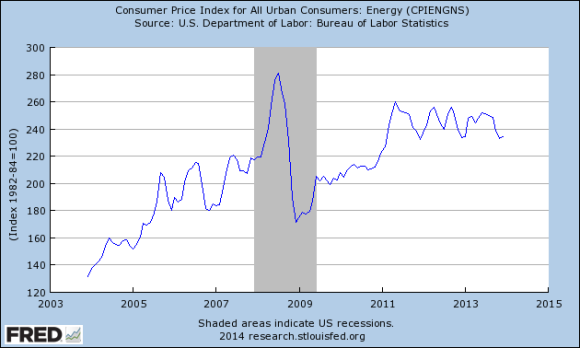 Food and fuel costs have marched steadily upward over the last ten years. This means that your dollar buys less food and fuel than it did in 2003 or 2004. 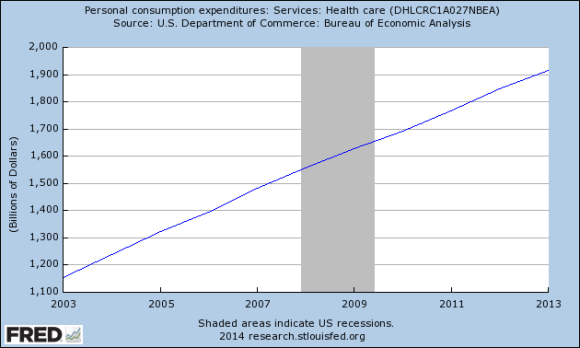 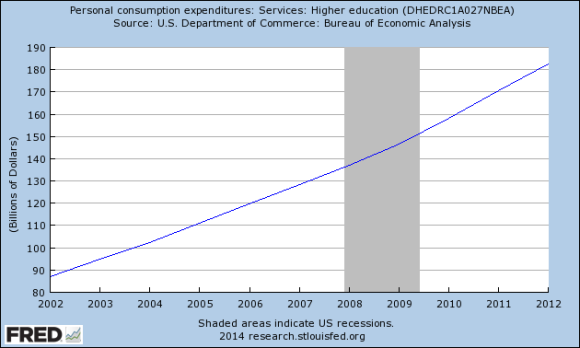 Health care and education spending have both marched steadily upward as well. This has some positive and negative aspects. Of course, more people having access to health care services is a good thing. At the same time, though, whenever more dollars or more consumers are introduced to a product or industry, prices will rise because demand has risen. Government subsidies are part of the reason that health care and education costs have risen:

Let’s take college tuition, which this year rose at a rate of 11 percent at public and 6 percent at private four-year colleges. In their defense, college presidents (whose pay has been rising faster than everyone else’s on campus) will blame students and their parents for demanding more services, programs and amenities. They’ll pull out flip charts to show that while the posted tuition appears to have leapt ahead, that’s really a statistical mirage because of all the extra scholarship aid (read: discounts) they are giving out. And if that’s not enough, they’ll send you studies showing that the value of a college degree, measured in terms of future earnings, makes a degree a Wal-Mart-like bargain.

All of this may explain why colleges want or need or deserve to raise tuition. But the reason, in the end, that they do raise prices is, like any business, because they can. And one of the big reasons they can is the ever-increasing amount of public money pumped into the system in a losing effort to keep college “affordable.” In effect, these well-intentioned subsidies have the perverse effect of shielding colleges from the kind of market discipline that would have forced them to hold down prices by constantly improving their productivity and efficiency, as happens in just about every other industry.

In health care, the big culprit is the tax deduction for employer-paid health insurance, which has hard-wired into the American psyche the expectation that companies should pay for their employees’ health insurance. After all, if an employer is willing to spend $9,000 to give your family comprehensive health care, few people would choose to take the $9,000 in cash, pay $2,000 in taxes on it, and use the remaining $7,000 to buy their own insurance.

While this is an older article, the underlining theory runs true: subsidies affect the market in a negative way by interfering with the correct method of “price discovery,” or allowing the market to find the right price for the right service or good.

Fast-forward to 2014. Obamacare subsidizes health insurance plans that for many folks are even more expensive now than their older plans (which we were told we could keep, if we liked them) — and distorts the free market by disadvantaging plans that are not subsidized by the government, or folks who are not entitled to subsidies, thus increasing costs.

As for education, costs are increased because of the increased availability of federal student loans. This has numerous negative effects on the consumer, including increased student loan debt.

What is the bottom line here? Government interference in the markets increases costs. When you make $15,000 a year, increased costs affect you more than when you make $150,000 a year. Granted, $15,000 a year is very difficult to live on — and it may be near impossible depending on where you live. This, however, does not factor in government subsidies.

Rather than focusing on the wage side of the equation, it would be more beneficial if the government stopped interfering in the free market by increasing the costs of the most important things folks rely on: food, fuel, health care and education. Dollars going farther would be a welcome thing. Conservatives and other free market lovers should focus on less government interference to slow down the artificial rate of price increases, which hurt the poor the most.

The markets are closed Monday for President’s Day, but look for a busy week including the Consumer Price Index (expecting another increase from last month) and jobless claims (estimated at 335k). Empire Manufacturing Survey will be released Tuesday morning and earnings season will continue as well.