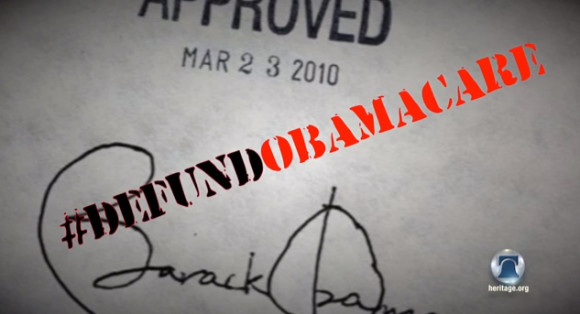 “I think there is a powerful defeatist approach among Republicans in Washington,” Cruz said. “I think they’re beaten down and they’re convinced we can’t give a fight. And they’re terrified.”

And he’s right. This is about the unwillingness of some to take on a political battle with the President over Obamacare, because they’re already convinced they will lose. After all, Eugene Robinson agrees:

Congress needs to pass a continuing resolution to fund the government beyond Sept. 30, the end of the fiscal year. The idea, if you can call it one, is that Republicans can refuse to pass any funding bill that contains money for implementing Obamacare.

Theoretically, Republicans could pull this off in the House, where they hold the majority. But the chance that a bill stripped of money for the Affordable Care Act could make it through the Senate, where Democrats hold power, is precisely zero. The chance that a House-Senate conference would starve ­Obamacare to death while Sen. Harry Reid (D-Nev.) remains the majority leader is also zero.

And if by some miracle such a bill were to make it to Obama’s desk, the chance he would sign it is way less than zero. To swallow the snake oil that Cruz and some other hard-right conservatives are peddling, you have to believe Obama is willing to nullify the biggest legislative accomplishment of his presidency.

So with the bill vetoed and no authorization to spend money, much of the government would have to shut down.

This gambit damaged the Republican Party back when Newt Gingrich tried it. In today’s toxic political climate, with approval ratings for Congress sinking toward single digits, it could be catastrophic. As things stand, Democrats have an uphill struggle next year to win the 17 House seats they need to regain the majority in that chamber. If the GOP forces a shutdown, however, Democrats’ chances might get better.

The notion however, that the 1995 shutdowns (there were two) damaged the GOP is largely nonsense. If anything, it pushed President Clinton to the right complete with rhetoric about the “era of big government” being “over” and him signing balanced budget deals as well as welfare reform.

Here is Daniel Mitchell in 2011 (when the GOP was again going wobbly on a potential shutdown – which had nothing to do with the terrible Affordable Care Act) talking about the shutdowns from 1995:

A timid approach, though, is a recipe for failure. It means that President Obama and Senate Majority Leader Harry Reid can sit on their hands, make zero concessions, and wait for the GOP to surrender any time a deadline approaches.

In other words, budget hawks in the House have no choice. They have to fight.

But they can take comfort in the fact that this is not a suicide mission. The conventional wisdom about what happened in November of 1995 is very misleading.

Republicans certainly did not suffer at the polls. They lost only nine House seats, a relatively trivial number after a net gain of 54 in 1994. They actually added to their majority in the Senate, picking up two seats in the 1996 cycle.

More important, they succeeded in dramatically reducing the growth of federal spending. They did not get everything they wanted, to be sure, but government spending grew by just 2.9 percent during the first four years of GOP control, helping to turn a $164 billion deficit in 1995 into a $126 billion surplus in 1999. And they enacted a big tax cut in 1997.

If that’s what happens when Republicans are defeated, I hope the GOP loses again this year.

So what actually happened in 1995, and why do Republicans have such unpleasant memories?

The debate that year hinged on some issues that favored the GOP, such as whether the budget should be balanced within seven years, and whether to use scoring from the Congressional Budget Office instead of the executive branch’s Office of Management and Budget. But there were also some issues that favored the Clinton administration, such as whether the elderly should pay higher Medicare premiums.

And it’s worth pointing out that 1995 was a perfect storm of fiscal-policy conflicts, featuring fights over appropriations (annual spending), reconciliation (taxes and entitlements), and the debt limit. This year’s fight — at least at this early stage — is only about appropriations for the rest of 2011.

Yet, I see tweets like this and I wonder what planet I am on:

Seriously? DeLuca along with a host of other pros are out there (not all of them) beating their chests and doing the Johnny Weissmuller Tarzan call saying the same thing, convinced beyond a shadow of a doubt, a shutdown will cost the GOP not only the chance to take the Senate, but also lose GOP control of the House.

Fact is however, you guys haven’t had a very good track record as of late. And by as of late, I mean the last 6-7 years, so you’ll have to forgive me if I don’t break out the Nostradamus awards any time soon for your prognostications about the GOP being “destroyed” because the government is shut down for a few weeks.

What makes me laugh even more, is the ridiculous assertion that the GOP base is to blame for all of this. When the GOP took control of the House in 2010 it was on the back of Obamacare and thanks in large part to the very same base voters so many within the GOP are casting blame upon now.

This kind of talk is part and parcel of what I have been seeing from a lot of people – whether it’s politicians, talking heads, consultants, people on social media, etc. — this absurd idea that the base voters within the GOP are to blame for all of this.

They come off sounding like the criminals caught at the end of Scooby-Doo cartoons. “If only it hadn’t been for those meddling base GOP voters!”

In the meantime the exact same people who say the GOP needs to stand pat and wait it out tell us every freaking day on television, in emails, on Twitter, in newspaper editorials, on the radio, on Facebook — anywhere they have an audience — how awful Obamacare is.

Contrary to what some may think, for the bulk of us this is not about RINO’s, “the principles” or stupid crap like “Boehner-Care.”

This is largely about political will and not being content to merely wait around hoping that by January 17th, there is a Republican in the White House and a GOP controlled Congress.

Obamacare is a cancer.

If the GOP plays a prevent defense, then nearly 3 years will have passed before a Republican President takes the oath of office.

And by that time, it will be too late.

The Obamacare cancer will have spread and the GOP will walking around wondering what happened and muttering about “fixing” Obamacare instead of finishing it off with a repeal.

This isn’t like battling a tax increase or even the Keystone pipepline. This is about a $1 trillion dollar monster that is going to have an even more devastating effect on our economy than it already has.

The meddling base voters deserve seeing the GOP take a shot at this fight.