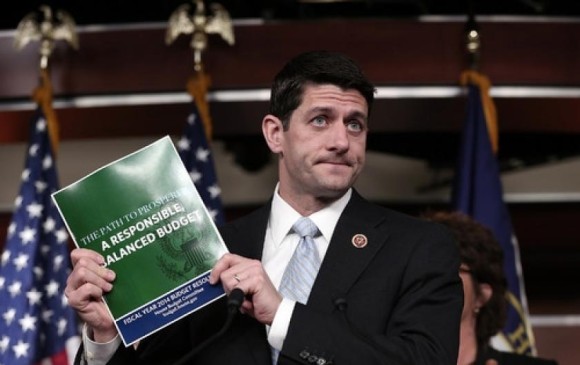 Chances are, if you’ve ever had the experience of attempting to purchase an automobile, you no doubt have heard a salesman say, “We’re not making any money on this deal.”

When I see Representative Paul Ryan on television attempting to sell people on the budget deal he agree to with Patty Murray as something “good”, all I get are visions of a car salesman saying, “We’re not making any money on this deal.”

I get that from a political perspective, Ryan and other Republicans feel like this is the best they could have done without having to deal with fallout from Harry Reid shutting down the government again.

Go ahead and make that argument.

But don’t hand me a turd sandwich and attempt to convince me it’s a pastrami on rye from Katz’s.

Tom Dougherty, when he’s not reminding everybody that unnamed organizations (ie Freedomworks) are only in it for the money (I guess political consultants all work for free), attempts to sell this deal as well with an unnamed source saying the following:

If you call opening 190,000 acres of offshore drilling and longer, systemic spending cuts instead of the presidential discretion through sequester “nothing,” then we got nothing.

You see, this is where BS detectors start going off like crazy.

First off, the United States is already taking over being the top producer of oil and natural gas in the entire world. 190,000 acres of offshore drilling is going to come as little comfort to members of the military who retire early and seeing their cost of living adjustments reduced.

Secondly, the “longer, systemic spending cuts” are an illusion. This budget deal is not locked in for ten years as some might think. Any of these spending levels can change over time and they most certainly will – as it always as in the past.

This budget deal is akin to NBA contracts that are fashioned to allow teams to sign big name players and remain under the salary cap. The salaries balloon towards the end of the deal when the player is most likely to be traded to a team with the cap space to take on the big portion of the contract. This budget increases the deficit in the first three years. Any deficit reduction is not scheduled to take place until 2017.

Among the other supposed “self serving generalities” in this budget are the following:

Still think this was a good deal?

As for Tom’s suggestion that organizations such as FreedomWorks and Heritage Action exist solely to raise money, he’s not the first to say so. I understand his frustration. Any checks that are written to FW, HA or Club For Growth are checks not being written directly to the GOP or to the candidates/officeholders they work for.

But has anybody stopped to consider why these groups have risen to such prominence? The GOP controlled the House, Senate and White House from 2002-2006. Were there any major reforms of the tax code? Any major spending reforms? No. Instead we got Medicare Part D and when President Bush wanted Congress to come up with a plan to allow people to contribute portions of their payroll taxes into private investment accounts, Republicans ran for the hills.

The Daily Caller responded to Speaker John Boehner’s absurd assertion that groups like FreedomWorks “have no credibility” with this:

Maybe the Ryan-Murray deal will turn out as promised. But that would be much easier to believe if Beltway Republicans didn’t have a bigger credibility problem that outside conservative groups.

It wasn’t the Club for Growth that got elected in 2010 promising $100 billion in spending cuts, only to immediately shrink that figure to $58 billion upon taking office.

It wasn’t Heritage Action that had to be dragged kicking and screaming into upping the spending cuts slightly to $61 billion — and then shrinking it again, all the way back down to $38 billion.

Then it turned out that the actual deficit reduction for fiscal year 2011, the beginning of the tea party Republican House majority, was just $352 million. But that can’t be pinned on FreedomWorks.

Wait, you say. These spending disappointments were because House Republicans had to deal with Democrats, who still controlled the Senate and the White House this whole time.

But what about when Republicans controlled both Congress and the White House for most of the period from 2001 to 2006? During this period of time, No Child Left Behind, Medicare Part D, Sarbanes-Oxley, McCain-Feingold, the Patriot Act and bloated farm, transportation and energy bills all became law. Discretionary spending grew twice as fast as it did under Democratic President Bill Clinton.

George W. Bush and Republican majorities added a Cabinet department rather than abolishing any, grew the Department of Education Ronald Reagan once pledged to close down. No Child Left Behind was Boehner’s baby as much as Bush’s.

Even if you exclude homeland security, domestic discretionary spending increased 40 percent from 2001 to 2006, a 7 percent annual growth rate, with mostly unified Republican control of the federal government. That compares to a 39 percent increase over Clinton’s entire two terms as president.

He’s right. Boehner, Ryan and others in the Republican Party have the credibility problem.

Does it really surprise anybody that the average Joe feels like his $100 check is being wasted when he sends it to them or to the GOP directly? He’s going to start sending it where he thinks it’s being put to better use.

Lesson for Republicans: Don’t make promises you can’t keep and don’t break the promises you do make and most of all, don’t try to BS the very people who elect you to do your job.

It pisses those people off.