It’s difficult to find an issue that grates on my nerves more than “zero tolerance” policies in our public schools. As is the case with many bad policies, zero tolerance began with good intentions. Designed to bring about an end to school students taking drugs or bringing weapons to school, the policy has often been revealed to be a farce, often times punishing some poor child for doing things normal young kids do.

Despite all of the bad news we see on television, the fear mongering from gun grabbers about the “dramatic rise in mass shootings” (which is not true), and the sense of panic in the overall culture, the fact of the matter is that this is the safest we have been in 40 years. Yet our society behaves as though every gesture is somehow a preface to the bloody violence that will come unless we “do something about it.”

For those of you more advanced in years, as I am, think about those times when you were a kid and played some form of a game with your friends that involved guns. Whether it was cowboys and Indians, cops and robbers, or “war” of some sort, we went around pretending to blow each other away for hours on end. At the end of the day, we grabbed whatever toy guns or guns we built out of sticks, cans or other throwaway items, went home and talked about doing it all over again the next day.

Never once did any of us perceive there to be a “threat.”

It wasn’t much different in school. But times have changed. And so has our view of common sense. Here is the latest story of this particular brand of asininity:

Ten-year-old Nathan Entingh doesn’t understand why he got suspended from school for three days.

According to his father, Paul Entingh, one moment the boy was “goofing off” with his friends in fifth grade science class, and the next the teacher was taking him out of the classroom invoking Ohio’s zero-tolerance policy.

The offense? Nathan was “making his fingers look like a gun, having the thumb up and the pointed finger sticking out,” said Entingh, describing the February 26 incident.

“He was pointing it at a friend’s head and he said ‘boom.’ The kid didn’t see it. No other kids saw it. But the teacher saw it,” he said. “It wasn’t threatening. It wasn’t hostile. It was a 10-year-old kid playing.”

Price “has been warning the students for some weeks,” said Warner. “We’ve had a problem at this school. The boys have gone around fake shooting and making paper guns at class. It’s inappropriate. She has sent notes to parents for the past three weeks alerting them of the problem.”

Let that sink in for just a moment: Fake shooting. Paper guns.

Have these people lost their goddamned minds?

As a parent, I would be upset if I knew my kid was making paper guns in class – that is, if he was supposed to be doing an assignment instead. I would encourage and expect the school to punish him for that. In that case, it wouldn’t matter if they were making paper bunnies. But to suggest it’s “inappropriate” or a “problem” goes to the heart of the screwed up condition of our culture: If boys behave as boys do, it becomes something that needs to be “fixed” or “dealt with.”

In a fashion similar to that of what Amy wrote about a boy’s natural instinct to be protective of others, in this case, 10 year olds have a propensity to live in a fantasy world. Often that fantasy world – which is harmless – involves guns.

All society is doing with these ridiculous zero tolerance policies is teaching young boys the poor lesson that it’s bad to be a boy.

In addition, they’re getting “records” in their school transcripts as if they’re problem cases. It’s absurd. Look at some of these other examples:

From that last link:

Last week, the parents pulled their sons out of Scottsdale Country Day School in Arizona after the school’s headmaster reportedly threatened to expel their 8-year-old over a set of drawings. According to the child’s father, the drawings of a soldier, ninja and Star Wars character were meant to depict Halloween costumes. However, school administrators were upset that the drawings showed each character holding either a knife or a gun, according to CBS local affiliate KPHO-TV.

He drew a picture of a soldier holding a gun. What a terrifying little bastard.

There has been some news recently that schools are starting to rethink such policies but the bureaucracy is such an ingrained part of the public school system that it will be years before anything changes.

Hang in there, Nathan. Don’t let the morons get you down. Oh, and: 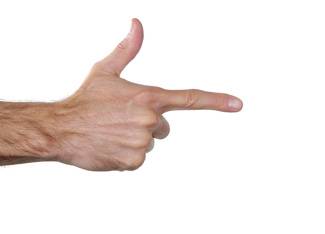