As I write these words, The Rachel Maddow Show is on in the background (Monday, March 3rd). Due to Republicans’ criticism of President Obama’s handling of the situation, Maddow referred to the right as having “pro-Putin sentiments” that will be “tested” in the coming weeks. The notion that either party actually wants Russia’s interests to trumps the United States’ is more than a little dramatic, but if not wanting to get involved in Ukraine’s Chaos is “pro-Putin” then so be it.

Call this non-interventionist libertarian “pro-Putin” then.

Aside from being surprised that the author of Drift seems very eager to intervene on Ukraine’s behalf, the nation’s interim Prime Minister had this to say on Monday, March 3rd:

In Kiev, interim Prime Minister Arseniy Yatsenyuk, who has accused Moscow of declaring war, vowed that his West-leaning government would not give up the region.

“Nobody will give Crimea away. … There are no grounds for the use of force against civilians and Ukrainians, and for the entry of the Russian military contingent,” he said. “Russia never had any grounds and never will.”

There’s no question in my mind that Russia has no grounds to enter or to use force in Crimea. Yatsenyuk is on point in that regard. Yet the whole kerfuffle must be put in context. Crimea has only been a part of Ukraine since 1954, after Khrushchev gave it to Ukraine in what is often described as “a gesture of good will.” When the Soviet Union collapsed in 1991, many expected Russia to regain the region, but former President Boris Yeltsin never demanded it. Crimea is no Kyiv. It’s a nebulous peninsula that has never been truly moored to Ukraine.

So given that recent history, here are the questions we should be asking before the United States joins up with Europe to ignite a geopolitical maelstrom:

And, all this aside, does Putin even care what the West thinks? This is a man who releases (staged) photos of hunting endangered species. 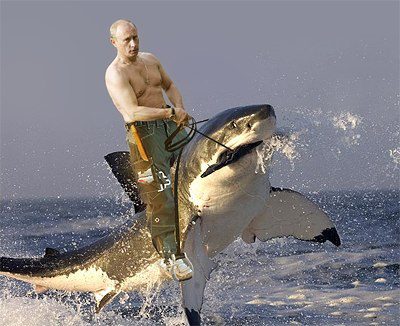 If you’re not sure how to answer these questions — then why should we jump into another international quagmire?

Remember that Ukrainians weren’t exactly in agreement about the Prime Minister that hightailed it out of Kyiv. Over half a million pro-Russian Ukrainians have already fled, creating a potential refugee crisis in Russia. And as the twenty-four hour news networks keep showing us, it’s no secret that many Crimeans are eager to return to their Motherland (so to speak).

Yet none of these words answer the question at the core of this conflict: Russia may have no grounds to go into Crimea, but what are the United States’ grounds for having to stabilize every single thing that happens on this planet? Heck, our own population is divided on even taking diplomatic actions against Russia.

Sound off in the comments.