Recently, I had written about Detroit being a city in transition. I was skeptical about an urban farming project and soon I will talk about two business related ventures in Detroit that are looking to help draw technical people and entrepreneurs.

I also had the chance to visit The Heidelberg Project:

The Heidelberg Project is art, energy, and community. It’s an open-air art environment in the heart of an urban community on Detroit’s East Side. Tyree Guyton, founder and artistic director, uses everyday, discarded objects to create a two block area full of color, symbolism, and intrigue. Now in its 27th year, the Heidelberg Project is recognized around the world as a demonstration of the power of creativity to transform lives.

The Heidelberg Project offers a forum for ideas, a seed of hope, and a bright vision for the future. It’s about taking a stand to save forgotten neighborhoods. It’s about helping people think outside the box and it’s about offering solutions. It’s about healing communities through art – and it’s working!

Art is always subjective. To be honest, I was not a fan of Tyree Guyton’s vision and his art but that’s just my viewpoint. I’m not a fan of Picasso either. I’d rather look at Monet myself, but considering the success of the project thus far, there are obviously fans. 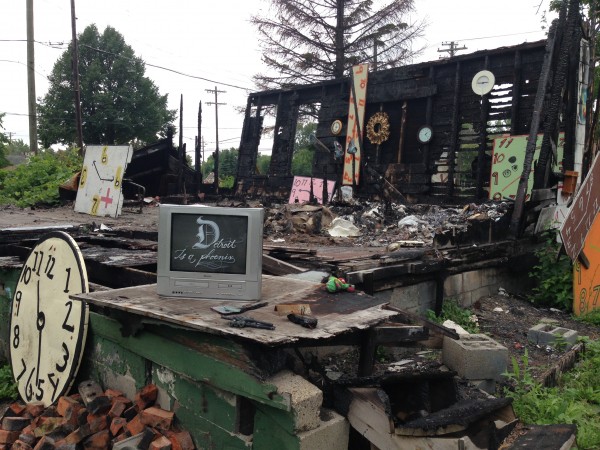 The question for me was not whether one liked or appreciated the art, but whether or not this was actually a project that was going to truly fuel a resurgent Detroit.

To be perfectly honest, I was skeptical, especially after having a chance to hear Tyree talk about the project and his vision for it. Tyree’s language was filled with clever sayings such as, “Sometimes what’s wrong is right and sometimes what’s right is wrong.”

When he was asked where he saw the project going and what he saw down the road he said, “It’s going to be what it’s going to be.”

I find such talk disturbing largely because it comes off as ego-centric and in my head I was thinking, “Is this really all about him?”

Art can be a terrific way to help revitalize a community. Sadly, over the last 30 years or so, we’ve reduced the emphasis on arts in public schools largely because they’ve had to put so much attention on preparing kids for standardized tests. Thankfully, the Internet has helped to provide instruction and mentoring for those interested in the arts and the philanthropic community has stepped forward as well.

After digging deeper it also appears The Heidelberg Project is doing its part as well. The Emerging Artist Program:

In an effort to advance the art movement in Detroit, the HP seeks to showcase four emerging artists in the HP gallery each year.

This program is undergoing changes and hopefully is resurrected soon but is very positive. Also, The ACE2 Program:

The Heidelberg Project’s ART, COMMUNITY & ENVIRONMENTAL EDUCATION (“ACE2”) program is a comprehensive program that supplements the lack of art education in metro-Detroit public schools and at the same time teaches children the value of the environment and community.

The ACE2 program includes a school presentation and workshop, an on-site educational field trip to the Heidelberg Project, and a visit with internationally-acclaimed artist Tyree Guyton up close and personal at his studio. The ACE2 program also includes an Educator’s Kit, a comprehensive curriculum with lesson plans, activities, and suggestions for an end-of-semester class project.

This is important as the tax base in Detroit has certainly shrunk, the ability to offer arts programs to kids in school becomes that much more challenging. This kind of project helps to pick that up.

If you want to learn more, be sure to check out FTR Radio. At the end of September (the 30th), Tom LaDuke will be interviewing Katie Hearn, the Marketing & Communications Coordinator for The Heidelberg Project on his show, ‘Bourbon On The Rocks.’