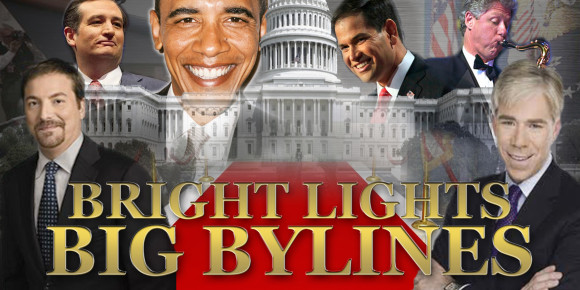 How often do you watch a news show only to want to throw something at the television because the host, who is supposed to be a journalist, is asking the most superficial of questions to a political guest?

24 hour news stations, the Internet and social media — blogs, Facebook, Twitter and YouTube — have accelerated a disturbing trend over the last 20-30 years. Journalists in Washington,  DC have slowly morphed from people who merely cover the news, to people who immerse themselves in the news and attempt to be a part of it.

While Ronald Reagan ushered in a new era of politicians (the “every man” that the average person could relate to), the celebrity culture surrounding politicians truly took hold with the election of Bill Clinton. Only 46 when he took the oath of office, President Clinton was a favorite of the Hollywood jet set and other celebrities. For the first time in 16 years, a Democrat was in the oval office and celebrities finally had one of their own – a counter culture baby-boomer to celebrate with. Fleetwood Mac performed at the Clinton inaugural ball and for the next 8 years, regardless of what Clinton did, the celebrities stuck by their celebrity President.

And so did the DC based journalists (for the most part).

It didn’t actually stop with George W. Bush, despite him being a Republican. GWB, unlike his father, was far more charming and despite being wealthy, had that “every man” connection to people and with the leadership he showed after 9/11, that same mindset was still prevalent. For a time, that same celebrity status was bestowed upon Rudy Giuliani and Donald Rumsfeld.

The political celebrity culture however, was taken to an entirely new level when Barack Obama was elected. Who can forget the ‘I Pledge’ video?

The DC journalists showed almost no shame in practically slobbering over President Obama and showering him with the kind or praise reserved for a King, not a President. Chris ‘Thrill Leg’ Matthews can explain that one.

The issue starts with the often incestuous relationship between the press and Washington, DC. The Daily Beast detailed that relationship as it exists just within the Obama White House.

The celebrity culture that has taken hold with politicians has led to a DC press corps that often wants to be a part of the game. How often are politicians these days referred to as “rock stars?”

Whether one agrees with their politics or not, the tag exists. Bill Clinton, Barack Obama, Sarah Palin, Ted Cruz, Marco Rubio, Elizabeth Warren….the list goes on. The current rock star of the political world?

People on Twitter and elsewhere complained about Chris Christie making the rounds on the Sunday talk shows and being asked all sorts of vapid, low hanging fruit type of questions. Many would blame it on poor journalism and that certainly plays a role, but these same hosts have often peppered guests with a range of pointed and tough questions. The bottom line is, Christie is a star right now, and he knows it and the DC press corps want to hang out with him.

In this respect, the lack of good questions is not about Christie so much as it is about them. At this moment, David Gregory is the star struck teenager with the Christie posters on his office wall.

Of course, that will change. Like a teenager, Gregory and others in the DC media will grow out of their crush, rip the Christie posters down and talk badly about him as they look for their next crush.

If there is any doubt about the DC press wanting to be immersed in the celebrity culture, one has to look no further than the White House Correspondents dinner. That is the moment for journalists to be the stars. They get to walk down the red carpet along with Hollywood celebrities and famous musicians. The guys from TMZ and Entertainment Tonight are taking photos of them.

And they love it.

It got so bad that finally, a long time journalist, Tom Brokaw, could no longer take it and has lashed out at the event and at the press corps that seemingly does not care what message it sends. Said Brokaw:

“What kind of image do we present to the rest of the country? Are we doing their business, or are we just a group of narcissists who are mostly interested in elevating our own profiles?’ And what comes through the screen on C-SPAN that night is the latter, and not the former.”

Whether one likes Brokaw or not (and he has his detractors on the left and right), he comes from a place of actual journalism. His career started in Sioux City, Iowa.

This is another other area of journalism that plagues the DC press corps, particularly those on television. Their backgrounds are not in journalism, but in politics.  Two perfect examples of this condition are George Stephanopoulous of ABC and Chuck Todd of NBC.

Stephanopoulos has zero experience as a reporter or journalist but was immediately given the role of a “political analyst” right after he left the Clinton White House. For whatever reason, he quickly moved up the ABC ladder and was named the host of ‘This Week’ in 2002.

Chuck Todd has a similar background. It started in the world of politics, not as him working as some beat reporter for a local newspaper. He became the Editor in Chief of National Journal’s “The Hotline” which is nothing more than a collection of news stories from other sources. Yet somehow, Tim Russert (who also had no background in journalism) thought it qualified Todd to be NBC’s Political Director in 2007.

Contrast that with Bob Woodward. Harry Rosenfeld, the Washington Post’s metro editor in the 1970′s, gave Woodward a two week trial at the Washington Post, but did not hire him because of his lack of journalistic experience. Woodward had to work at The Montgomery Sentinel for a year before being hired by the Post.

All of this leads me to this question:

How are people expected to believe they are going to cover politics fairly and with the kind of zeal needed to find the truth when they are already part of the political culture and now want the celebrity status as well?

It’s part of the reason Todd will say something so monumentally stupid at times and he doesn’t even realize it (and will take serious umbrage of it on Twitter when he is called out).

It’s because his mindset is not one of a journalist. He’s looking at the issue from the perspective of a beltway insider and one that wants to be part of the “in” crowd with the political “rock star” class.

Unfortunately, none of them seem to care. Look how they ignored Tom Brokaw. He called them out in 2012 and 2013. Think it will be any different in 2014?