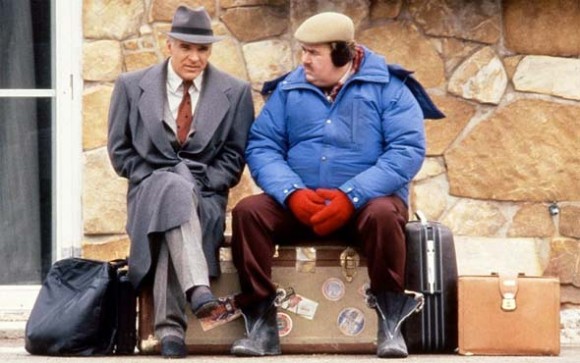 Ironically, the first time I saw ‘Planes, Trains and Automobiles’ was in theaters on Thanksgiving (<insert lame ‘old’ jokes here> – Yeah, suck it Trebek. Unlike you fools, I actually got to experience the great decade of the 80′s not just pretend how awesome it was) in 1987.

And I remember laughing the entire time.

Usually, when one speaks of holiday movies, they almost always revolve around Christmas. Nobody ever says, “What’s your favorite Thanksgiving movie?”

That being said, I don’t consider the holiday movie season started until there is a viewing of Planes, Trains and Automobiles. This is not a movie one watches simply because it is a holiday movie. It is a classic in its own right (for some reason it did not make the AFI Top 100 Comedies) and easily one of the funniest movies of all time.

I won’t bore you with details of the plot as I am sure if you’re still reading this, you’ve seen the movie. If not, shame on you. I am merely going to talk about why it’s so great. How about a Buzzfeed list? Why not?

1. The stars are perfect in the movie – Talk about perfect casting. Steve Martin is a truly gifted comedic actor. With Martin, it is not just dialogue. It’s how he delivers it and how he can make us laugh with just a few facial expressions. John Candy, for the first hour of the film, gives the movie its heart. Until Neal (Martin) has his Scrooge-like epiphany late in the film, it’s Candy that brings a vulnerability to the screen. Yes, he’s loud. He’s annoying, has a bad mustache, and dresses horribly, But the moment Neal goes off on him in the motel room, we see the look of hurt on Del’s face and we immediately empathize with him.

2. The movie delivers lots of laughs – The movie runs over 2 hours but it never feels that long. From the opening scene to the last few minutes when Neal is laughing about the adventure he’d just been on, hardly a moment goes by when you’re not smiling or laughing. That’s a testament to the greatness of John Hughes. Which leads me to…

3. John Hughes cemented his greatness with this movie – From 1983 until 1987, Hughes wrote, produced or directed (sometimes more than one or all three) the following movies:

Hughes movies won’t be the type that go down in the pantheon of great cinema. But they’re great movies and fun to watch.

4. It’s always quotable –  In fact, it is a movie that can be identified by one single quote that everybody knows and knows exactly what scene it took place:

“Her first baby….come out sideways. She didn’t scream or nuthin.”
“If I wanted a joke, I’d follow you into the john and watch you take a leak.”
“Oh he’s drunk! How would he know where we’re going?”
“Six bucks and my right nut says we’re not landing in Chicago.”
“What do you think the temperature is?” “One.”

5. It contains one of the funniest scenes in movie history –  It’s also the scene that earned the movie an ‘R’ rating because aside from this scene, the movie was easily PG-13. It’s the car rental scene and it features 19 total f-bombs. 18 from Steve Martin and 1 from Edie McClurg. What makes it so great is not the words themselves but the delivery. Tell me you don’t laugh when Martin says, “….across a f*****g runway…”

For fun, here is the scene in question:

Anything to add? Favorite scenes or quotes?