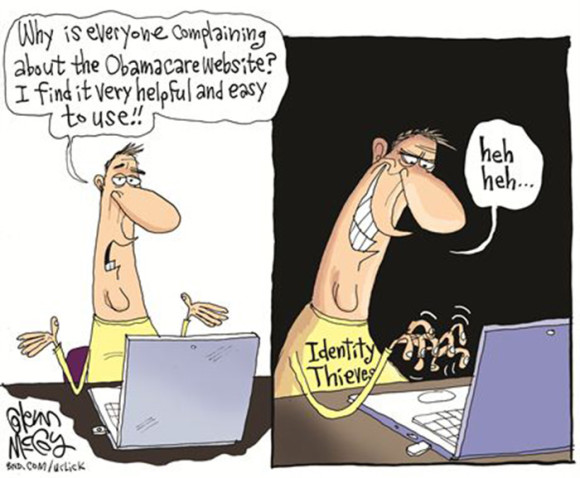 I wonder how many of them are former ACORN operatives:

California has released some disturbing statistics on criminal backgrounds of its navigators, I report today.

In other states, a forgery, welfare-fraud, or other financial-crimes conviction automatically disqualifies applicants from becoming navigators. But in California, that’s not the case.

How concerned should Californians be? Covered California’s official spokesman says these crimes were committed in the past, and the approved navigators have reformed and paid their debt to society. Other official correspondence suggests the opposite, though. Explaining why the health exchange couldn’t release some records to National Review Online, a Covered California attorney wrote:

“All of these documents are nondisclosable because ‘the public interest served by not disclosing the record clearly outweighs the public interest served by disclosure of the record.’ (California Government Code §6255) Disclosing the names and criminal records of individuals applying to assist in Covered California’s push to enroll vast numbers in health insurance by March 31, 2014 is likely to discourage participation in this critical program and thus harm the people of California.”

In other words, if Californians knew what their officials know about the navigators, it might deter them from signing up for Obamacare coverage.  Also, that’s a fairly shameless admission of Covered California’s political goals; we’re being asked to assume that a “push to enroll vast numbers in health insurance” is within the “public interest,” and anything that deters enrollment would “harm the people.” Furthermore, we’re supposed to take that political explanation as sufficient justification for the withholding of records that may otherwise be public.