Obamacare: they’ll tell you it’s liberating, invigorating, and even define it as freedom.

It's a simple concept we call [airquotes] "funemployment." pic.twitter.com/duLzZEzyB9

But really it means there will be, according to the CBO, 2.5 million less Americans working in the coming years. According to testimony today, the labor force participation drop will be the central factor in slowing economic growth.

Who are these people who won’t be working?

“By providing heavily subsidized health-insurance to people with very low income and withdrawing those subsidies as income rises, creates a disincentive for people to work, relative to what would have been the case in the absence of that act.” – Doug Elmendorf Testimony at House Committee Hearing

So it’s the poor. Obamacare is a huge incentive for the poor to never try to improve their income status through earned success.  This means the income inequality gap would necessarily widen for the poor as they would have to face losing subsidized healthcare in pursuit of more income.   Meanwhile Obamacare is missing enrollment targets in both Medicaid and the exchanges. Obamacare is also projected to leave 31 million uninsured and has thus far resulted in more people losing their policies than new enrollments.

“CBO and JCT project that, as a result of the ACA, between 6 million and 7 million fewer people will have employment-based insurance coverage each year from 2016 through 2024 than would be the case in the absence of the ACA”

The realities of what access you get with those policies are becoming daily horror stories for many Americans not to mention the rate shock that many folks get when they find out what their new premium and out of pocket expenses are compared to last year. One could ask why would anyone on either side of the aisle cling so bitterly to a clearly failing policy prescription that the American people persist in rejecting?

“Economist Emmanuel Saez estimates that fully 95% of recovery gains have flowed to the top 1% of earners.” 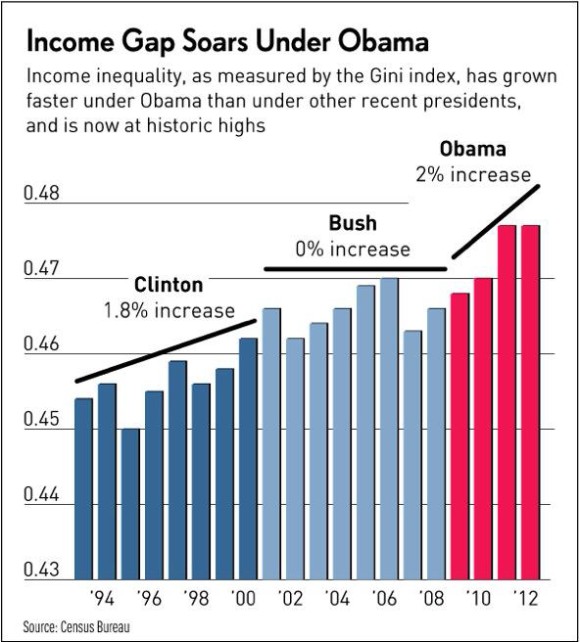 Every single 2014  policy push from the Democrats leads to less employment.

In the words of Mick Jagger, the Democrats want you under their thumb

It’s down to me, yes it is
The way she does just what she’s told
Down to me, the change has come
She’s under my thumb
Ah, ah, say it’s alright