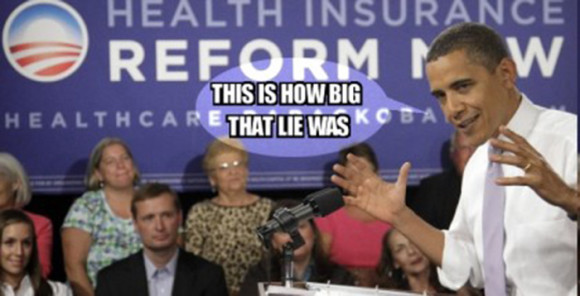 Last year’s recipient of the WaPo’s “Lie Of The Year” isn’t about to let his lyingest liar that lies title go without a fight.

“We’ve got close to 7 million Americans who have access to health care for the first time because of Medicaid expansion.”

The Fact Checker has written several times about the fuzziness of the Medicaid numbers issued by the Obama administration. But it is like playing whack-a-mole. Every time we rap someone for getting it wrong, the same problem pops up someplace else.

But here is the ultimate authority — the president of the United States — making the problematic claim that everyone counted under the administration’s Medicaid math is getting “access to health care for the first time.” Time for a refresher course!

So far, 25 states and the District of Columbia have expanded Medicaid, while four more are considering it. Under the ACA, the government will initially pay 100 percent of the cost of expansion, though it eventually drops to 90 percent. (Under the current formula, the cost is split at least 50-50 between the states and the federal government.)

The Congressional Budget Office estimates that because of the ACA, the number of Americans on Medicaid will increase by 8 million in 2014. (The estimate was recently revised downward from 9 million because of the stumbling start of the law’s implementation.) Most of those people would be in the new pool of applicants, but it could also include some people who were previously eligible for Medicaid but had never signed up before all the publicity about new health-care options (known as people coming out of the “woodwork”).

But the figures released by the  Center for Medicare and Medicaid Services, a unit of the Department of Health and Human Services, lumps together all sorts of Medicaid applicants, including people previously enrolled in Medicaid who are deemed eligible for another year (in other words, “normal churn”), as well as people who would have been eligible under the old law. The most recent report gives a top-line figure of 6.3 million people deemed eligible from Oct. 1 to Dec. 31, which is presumably where Obama got his 7 million figure. (An updated report through January is expected soon.)

Avalere, a health consulting firm, in a recent analysis raised serious questions about the 6.3 million Medicaid figure, estimating that only 1.1 million to 1.8 million of the claimed enrollees could be attributed to the Affordable Care Act. That estimate generated headlines, including a full report in The Washington Post that said it suggested “many of the people who have joined the program since the initiative’s rollout in October would have done so absent the law.”

What does this mean in terms of evaluating the president’s statement? He seems to be falling into the same trap as other Democrats, and some reporters, by assuming that everyone in the Medicaid list is getting health insurance for the first time because of the Affordable Care Act. But that number is nowhere close to 7 million. It could be as low as 1.1 million (Avalere) or as high as 2.6 million (Gaba.) If one wanted to be generous, one could include people coming out of the woodwork, even though they would have been covered under the old law, but no one is really sure what that figure is.

In any case, no matter how you slice it, it does not add up to 7 million. It is dismaying that given all of the attention to this issue, the president apparently does not realize that the administration’s data are woefully inadequate for boastful assertions of this type.

Considering Obama’s penchant for lying and not taking responsibility, his entire presidency should come with a disclaimer.