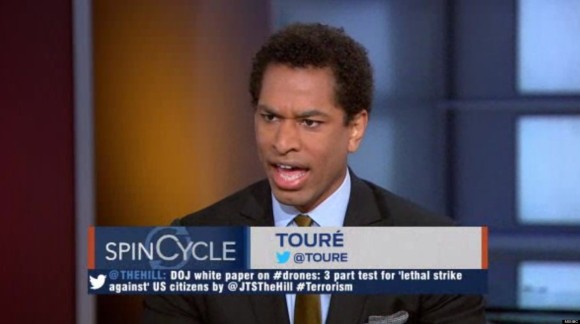 There are some applauding MSNBC’s decision to suspend Alec Baldwin’s show for two weeks after he was caught yet again, using gay slurs. It’s the equivalent of telling a young boy to go stand in a corner for 15 minutes for disobeying Mom.

I could sit here all day and wax poetic about double standards. We know what kind of crap storm this would have been if Bill O’Reilly or Greg Gutfeld had called a photographer a “c**ks**king fag.”

Even on MSNBC there are double standards. Mark Halperin was suspended “indefinitely” because he called President Obama a “dick” back in 2011.

The real question is: What in the world are the executives at MSNBC thinking?

Not long after Baldwin’s tirade, Martin Bashir on his show, suggested somebody should take a dump in Sarah Palin’s mouth. Nice, huh? Her crime? She used a long standing tactic of using slavery to discuss debt. The term “slave to debt” is nothing new and has long been part of the lexicon.

Naturally, Bashir (along with other stupid liberals) have attempted to cast Palin’s words as a side by side comparison to actual slavery.

It’s odd, but I thought liberals such as Bashir represented the “smart set”? Apparently, people like Bashir and others who proclaim to have superior intelligence to conservatives because they support Obamacare, don’t know the difference between literal and figurative.

Guess what Martin? Nobody actually ever looked for a needle in a haystack.

Bashir and Baldwin are just two of the head scratching hiring decisions MSNBC has made over the last several years.

Lawrence O’Donnell – Remember when he challenged Tagg Romney to a fight? The truly bizarre part of that episode was O’Donnell faking a Boston accent and pretending he was raised on the mean streets of Boston when he was in fact, the son of an attorney (father) and office manager (mother) who attended the elite Catholic school, St. Sebastian’s (Tuition for one year at St. Sebastian’s is currently $38,000 per year).

Ed Schulz – While it was not while he was on air at MSNBC, Schulz called conservative commentator Laura Ingraham a “right wing slut.”

Martin Bashir – In addition to his latest comments about Sarah Palin, he once compared Senator Ted Cruz to David Koresh.

Toure – He is a 9/11 truther. He looks for any reason to call people racists including the absurd claim that if President Obama were not re-elected in 2012 it would only be due to racism.

Al Sharpton – Racist. Anti-Semite. That’s all that really needs to be said. Ironic considering MSNBC told Pat Buchanan to take a hike because of his views. Last time I checked though, Buchanan had no part in events that led to the deaths of seven people. Sharpton did. And who can forget this train wreck:

Congratulations MSNBC. By hiring this group of imbeciles and kooks, you’ve managed to do what was once thought to be impossible.