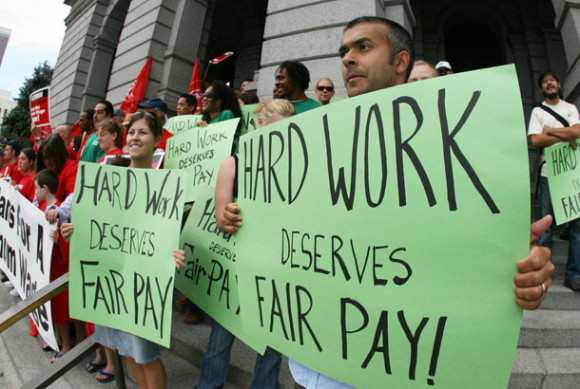 The ongoing Sturm und Drang swirling about the minimum wage has handily distracted us from Obamacare’s continuing illegitimacy, so we may as well indulge it.

On the one extreme you have Elizabeth Warren, who would like to have a $22/hr minimum wage, and on the other you have those who’d like to get rid of a minimum wage altogether.

Somewhere in the middle, there is a conversation happening.

The question is whether we should raise the minimum wage, or lower it – count me firmly in the camp that says we should lower it, or keep it the same.

Witnessing the impassioned pleas for more money by struggling service industry workers, it is understandable to be moved by pity or a sense of fairness. After all, these people work, unlike some – shouldn’t they be able to advance their situation? No question, they should be able to do so.

But staying in a minimum wage job doing minimum wage-worthy work is not the way to do that. The great advantage of the American system is mobility – you can and must move on from where you started. Nobody but the most coddled and swaddled elites starts out in an industry poised to advance.

At fifteen or sixteen, you likely possess no valuable skills, no worthwhile experience, and limited social awareness. You are worth less than others. And so you should be paid less.

Just how much is unskilled labor worth? Whatever society is willing to pay for it, in an ideal situation. In reality, the federal rate is $7.25/hr. Some states have set it higher or lower. That’s not much. But even that amount is often burdensome on business, which means they are less able to hire. That in turn leads to fewer hands on deck providing a service, which may lead to worse customer experiences, which leads to less business, which leads to less of an ability to pay existing staff, which leads to layoffs or reduced hours, which presumably leads to some sort of worker’s revolt if we skip a few steps.

It’s hard to make a living on minimum wage. Impossible, some might say. That’s true. It’s because minimum wage work isn’t meant to support you, a family, a pet, or your investment portfolio.

Minimum wage is meant to give people who would otherwise be earning nothing a chance to earn something, develop skills, and cultivate personal relationships and networks that allow them to transition to meaningful employment. It is far preferable to doing nothing at all, and one hopes that those who are able to do so would have a community of friends and family with whom they could pool resources should they be unable to secure more gainful employment.

People who are unable to do this are not worth as much to society and employers as those who can, and they are constrained by this circumstance. Simply paying them more won’t solve their problems, and may in fact add to them. Increasing the cost of unskilled labor increases the cost of the service or goods being produced – their additional income would flatline and they’d end up not much better off than they were before. To say nothing of those who already make wages above the minimum – is their labor to be adjusted upwards, relative to the increase? Or is their labor now worth less than it was? Is that fair?

Life does happen, hardships occur, and what might have been a tolerable if precarious financial situation can become less so. That is not sufficient reason to raise the bar to entry for the unskilled and inexperienced.

Far more valuable to society to keep the minimum wage as it is, or lower it, and perhaps allow for more people to have a crack at bettering themselves through menial but necessary work.