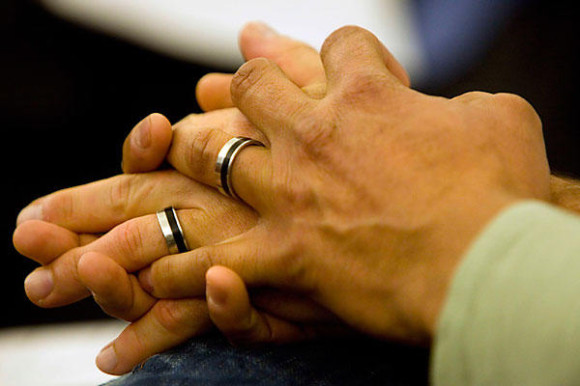 Jay Caruso has started a conversation about the marriage debate, and specifically whether gay marriage is a matter of equality, with a great piece. I endorse Jay’s position that gay marriage is essentially not an equality issue. I won’t reiterate his points here – you should read them from his post directly – but I will add my own two cents in here to show how I arrive at my conclusion.

Anna Morris argues that we are wasting everyone’s time and alienating people on this issue unnecessarily. Gay marriage is happening and we ought to realize that and throw in the towel. Okay, sure, after I accept Obamacare as an eternal part of our health care system.

There is no such thing as a permanent win or loss in politics or culture. I make this argument partially to correct many misunderstandings of the marriage issue and in defense of traditional marriage – more for that reason, in fact, and hopefully to strengthen it as an institution, than to oppose gay marriage. One of my pet peeves with the gay marriage movement is its insistence on misconstruing my position, just like all leftists.

Supporters of gay marriage usually argue against some combination of three “inequalities:” unequal love, unequal rights and inequality before the law.

Marriage is not about love.

Okay, yeah, it is. But the civil interest that the state has in marriage has nothing to do with love.

No one needs the government’s help to love someone. No one is prevented from loving anyone because the state hasn’t granted them a marriage license. So seriously stop.

The government doesn’t care if a couple loves each other and it shouldn’t. However, the state does have an interest in encouraging the basic building blocks of society, which, as Aristotle and others have correctly noted, begins with what we know of as the traditional family.

Marriage is not about rights.

There is no right to be married. Not in the republican tradition of natural law. Not in our civil rights granted by the Constitution. If marriage were a right, why would the government have to license it? (Hence my opposition to firearm licensing, but that’s another story.)

Marriage in the civil sense is a contract between two people and the state that includes rights, as well as obligations, but there is no legal right to enter into that contract. The rights and obligations that go along with marriage stem from the desire to foster such relationships and therefore society. It has never been a question of the freedom to enter into a relationship.

I would argue that there ought to be a legal right to love whomever you choose. I would also argue that that exists de facto now anyway. But that is beside the point, because that is not what marriage is, not when it comes to its rights and benefits (and obligations.)

Marriage is not about equality before the law.

The best argument that supporters of gay marriage have is that is impelled by the 14th Amendment’s clause about “equal protection.” Equality before the law is one of the quintessential American ideals. It is important to remind ourselves what this means, which is that two people who engage in the same action will not be treated differently on account of being different people (i.e. a king and a peasant).

Only traditional marriage is a relationship of a child-producing couple pledged primarily to themselves and the raising of any children they might have. All other relationships are evidently different and have different effects.

I know that I don’t need to produce the social science data that show the statistical disparities between traditional and other families, as well as cohabitating couples, single mothers, etc. – most readers are already familiar with all of that – but those distinctions are precisely the justification the state offers for its interest in marriage.

I hate to have to point out the glaringly obvious here, but gay people are not physically or emotionally attracted to the opposite gender. That’s what makes them gay. So to say that they should just choose to marry someone they aren’t in love with is silly, completely undermines the entire argument from conservatives who say that marriage is about love and union between two people, and makes same-sex marriage bans inherently unequal.

I don’t know anyone who actually suggests that gays do this. I also hate to have to point out the obvious, but being straight does not mean that I get the same marriage rights as anyone else. I may never find someone I am attracted to who will marry me. Maybe she doesn’t love me, maybe she doesn’t like the idea of marriage or “being tied down.” Perhaps I could marry someone I’m not attracted to and get the benefits.

I won’t though, because the benefits and rights are part of the civil aspect of marriage, where the government is involved. Anna agrees with me that in the civil sense, marriage is not about love. I, on the other hand, enter a relationship precisely because of love. If I cannot find someone who I’m attracted to who will agree to marry me and create another basic societal building block, it is not the law’s responsibility to give me a tax break.

In the face of clear differences between the nature of these relationships and their empirical results, this argument is, to me, no different from arguing for maternity leave for men while faced with the obvious truth that men cannot become pregnant.

Gay marriage supporters often argue that government should get out of the way of gay couples and their relationships. While I agree that laws banning such relationships are silly, marriage is a whole different animal. As noted above is a contract between two people and the state that includes rights and obligations. It is not the government getting out of the way. Is the government more involved or less when you go from dating or being engaged to being married? Exactly.

The conservative (and, I would argue, libertarian) position ought to be that the government should be as little involved as possible or as justified.

If I were inclined to consider this as solely from a logical perspective and not a traditional one (I’m not, but for the sake of argument…), I would begin with a society in which there is no government involvement in marriage. It is solely connected with churches, each of which can do as they please with it.

This is actually my exact position on any “marriage” outside of the traditional sort. When it comes to traditional marriage, I would like to see a reformation of laws (divorce law, e.g.) to better encourage fidelity and responsible child-rearing. Other relationships ought not to be banned, but there is no rational reason for government to encourage them either.

The Constitution and federalism

Last point: marriage is not an issue for the federal government according to the Constitution, nor should it be. Every state can and should legally decide what it wants to about the issue, like every church ought to be able to decide for itself. My preference is that they all side against gay marriage, but it isn’t my business when it isn’t my state or church, and I’m perfectly okay with that.

To sum up my position: most every kind of consenting relationship should be allowed – everyone knows what kinds of reasonable limits on this we should have – but the government should be involved in only one of them for the purpose of encouraging its societal benefits. My position does not deny anyone love, their rights or their equal protection of or equality before the law.