Climate change is a fact.  It happens 4 times a year…  Winter, Spring, Summer and Fall.  It’s also a fact that Earth’s climate has changed several times throughout the history of the planet.  The climate cultists, however, would have you believe that palm trees will soon be popping up along the West Side Highway, and that Florida is in danger of floating off the map, all caused by evil capitalist men and their pursuit of oil/gas/coal/bqhatevwr.

In a recent study by the Univ of Texas, they found that heat from volcanoes under the glacier is hotter than previously thought and is likely a key factor in the ice sheet collapsing.

A new study by researchers at the University of Texas, Austin found that the West Antarctic Ice Sheet is collapsing due to geothermal heat, not man-made global warming.

Researchers from the UTA’s Institute for Geophysics found that the Thwaites Glacier in western Antarctica is being eroded by the ocean as well as geothermal heat from magma and subaerial volcanoes. Thwaites is considered a key glacier for understanding future sea level rise.

UTA researchers used radar techniques to map water flows under ice sheets and estimate the rate of ice melt in the glacier. As it turns out, geothermal heat from magma and volcanoes under the glacier is much hotter and covers a much wider area than was previously thought.

“Geothermal flux is one of the most dynamically critical ice sheet boundary conditions but is extremely difficult to constrain at the scale required to understand and predict the behavior of rapidly changing glaciers,” UTA researchers wrote in their study, which was published in the Proceedings of the National Academy of Sciences.

The geothermal heat under the glaciers is likely a key factor in why the ice sheet is currently collapsing. Before this study, it was assumed that heat flow under the glacier was evenly distributed throughout, but UTA’s study shows this is not the case. Heat levels under the glacier are uneven, with some areas being much hotter than others.

“The combination of variable subglacial geothermal heat flow and the interacting subglacial water system could threaten the stability of Thwaites Glacier in ways that we never before imagined,” lead researcher David Schroeder said in a press release.

“It’s the most complex thermal environment you might imagine,” echoed co-author Don Blankenship “And then you plop the most critical dynamically unstable ice sheet on planet Earth in the middle of this thing, and then you try to model it. It’s virtually impossible.”

Scientists and environmentalists have been pointing to Antarctica’s collapsing western ice sheet as further evidence the planet is warming. NASA glaciologist Eric Rignot recently found that the western ice sheet collapse is “unstoppable” and could dramatically raise sea levels.

Wait, don’t go all Water World and build yourself a house boat, this is not new.

Previous studies have also shown that the collapse of the continent’s western ice sheet is nothing new. The British Antarctic Survey (BAS) has released two major studies in the last year showing that the thinning south pole ice is nothing new.

A BAS study from February found that Antarctica’s Pine Island glacier thinned just as fast 8,000 years ago as it has in recent times — it also was able to reverse the collapse.

Another BAS study from last year says western Antarctic thinning is within the “natural range of climate variability” of the last 300 years.

Climapocalypse warming rate predictions haven’t fared any better.  The global warming rate was predicted to be + 2.33 Cº/century.  The actual temperatures were -.87 Cº cooler and have been trending colder since 2005.   Miss Cleo has better predictions. 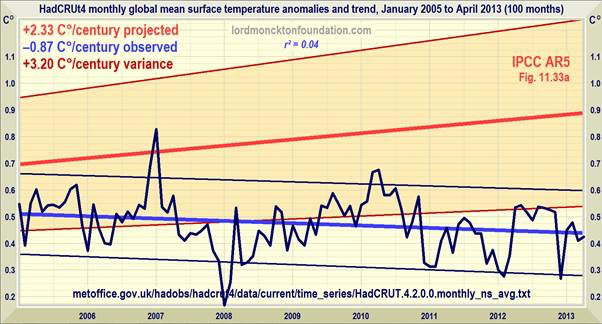 Along those lines, one of the latest climate memes being pushed by the White House and their Minions, is that 2001-2012 was warmer than any previous decade.  I was kind enough to provide the Ms. Pelosi evidence to the contrary.  I’m a giver.

Reality begs to differ. #FactsAreHard MT @sfpelosi: The last decade was the hottest ever #ActOnClimatepic.twitter.com/r1r7tqY12R

But, you know, the science is settled.