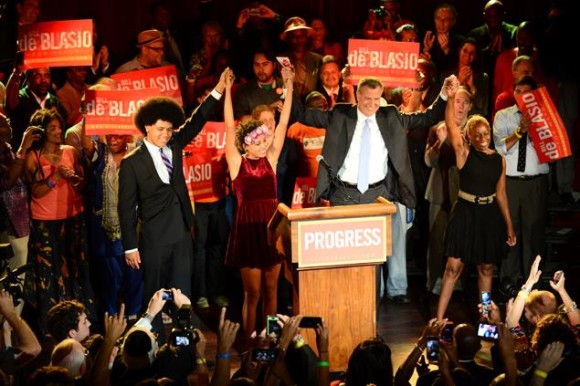 Faults aside (particularly Bloomberg’s incessant nanny-statism), it was a terrific run.

Only those who saw NYC in the late 70′s and 80′s through the early 90′s know what an absolutely remarkable transformation the city has undergone during the 20-year stretch from the time David Dinkins left until the time Bill De Blasio took the oath of office.

Everybody has been celebrating the fact that Chicago saw a large reduction in homicides since 2012. With over 500 in 2012, Chicago saw a reduction to 413 in 2013. New York City, with a population three times the size of Chicago, had 333 homicides. Compare that to 1993, the last year of David Dinkins administration when there were 1,960 homicides.

Giuliani was swept into office in 1993, built largely around a campaign centered on quality of life. Giuliani posited the idea that the seemingly “little things” created an atmosphere that allowed for more serious actions to take place. As such, while officials in the past may have thought of squeegee men, turnstile jumpers, and graffiti artists merely as nuisances, Giuliani and new Police Commissioner William Bratton took direct aim at these groups.

In 1995, Giuliani aided this effort by successfully consolidating the NYPD, Transit Police, and Housing Police into one cohesive unit that allowed for better communication and overall better policing. Giuliani and Bratton’s implementation of CompStat helped the police become more proactive in fighting crime and, during Giualini’s tenure, crime overall was reduced by 57% and the homicide rate was reduced by 65%.

Giuliani also sought to make certain areas of NYC a better place to visit. His focus landed on Times Square — and through public pressure, as well as making it palatable for companies like Disney to develop there, Times Square went from a sordid landscape of peep shows, hookers, and addicts to coffee shops, new restaurants, and businesses.

Mike Bloomberg, in spite of all his nanny-state nonsense, managed to maintain many of the same quality of life and policing policies implemented by Rudy Giuliani. As such, the city continued to flourish. If you told somebody in 1991 that the Bedford-Stuyvesant and Bushwick neighborhoods of Brooklyn would, in 20 years, be areas people were clamoring to move to — they’d have laughed in your face.

That’s why it was disappointing to see New York City residents elect Bill De Blasio as Mayor. An unrepentant supporter of Sandinistan Marxists in the 1980s, De Blasio was able to capitalize — thanks in part to poor GOP candidates and the clown show of Anthony Weiner that made the new Mayor look positively sane in comparison.

De Blasio isn’t just a Democrat. He’s a leftist and while he was able to be somewhat more diplomatic during his inauguration, his supporters who spoke there gave us a glimpse of how he plans to govern. It was so bad, even the NY Times remarked:

Too bad the speakers on stage with him didn’t get the unity part, marring the event with backward-looking speeches both graceless and smug. Worst among them, but hardly alone, was the new public advocate, Letitia James, who used her moment for her own head-on attack: on the 12 years of Mayor Michael Bloomberg. In doing so, she made a prop of a 12-year-old girl named Dasani, who had to hold the Bible and Ms. James’s hand as Ms. James called for a government “that cares more about a child going hungry than a new stadium or a new tax credit for a luxury development.”

Don’t be fooled by De Blasio’s more civil tone. He’s more aligned with Ms. James and Harry Belafonte’s brand of leftism than he will let on. It’s not a surprise then to learn that one of the first things De Blasio wants to do is raise taxes. Another critical item on his agenda is putting an end to the horse and carriage trade in the city.

There’s nothing like narrowing that income gap he bemoans by putting several hundred people out of work, Mr. Mayor.

The effects of Mr. De Blasio’s policies won’t be felt for some time. After all, Rome was not built in a day. It took John Lindsay, Abe Beame, Ed Koch, and David Dinkins over 20 years to turn New York City into a cesspool. It didn’t take as long for Giuliani and Bloomberg to turn things around, but it’s still a work in progress. At the very least, De Blasio is going to put a halt to that progress.

Time will tell how much damage he will do overall.