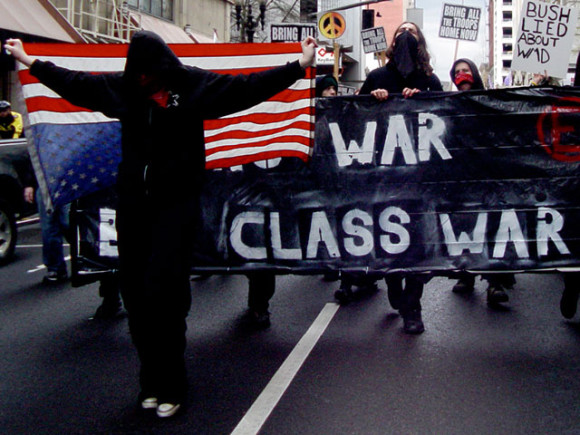 As an observer of politics and media, I read a lot of stuff. Occasionally I come across a post or column that nails a point so well I’m compelled to expand on it. But first, you should read it.

Stop. You didn’t read it. Go read it for real this time and then come back.

Ok. That’s better. Ruth R. Wisse’s column eloquently lays out a concept that you probably already “knew” but never really put into words. Yes, her focus is on class warfare and how that led to anti-Semitism in the past. The real point, which she identifies, is how targeting “haves” or “the rich” – or, in my view, any group who is perceived to enjoy an advantage over other groups – is a dangerous way to organize a political movement.

My point is broader: Stoking class envy is a step in a familiar, dangerous and highly incendiary process. Any ideology or movement, right or left, that is organized negatively—against rather than for—enjoys an inherent advantage in politics, mobilizing unappeasable energies that never have to default on their announced goal of cleansing the body politic of its alleged poisons.

Again, this is very likely something you’ve “seen” without being able to pinpoint it. A “class” doesn’t have to necessarily be a socioeconomic striation. Sure, they’re the easiest to identify. You’ve got race, income / wealth, etc. But the class stuff can take different forms. All you need is one group being perceived to have some kind of advantage over other groups. Then you get “leaders” who play to these “unappeasable energies.”

The sick part is that it works. It has worked since the dawn of time. It is Envy. Someone has something and you don’t. There’s an animal instinct in us that we have yet to overcome. We want things others have. The vast majority of people channel that energy into hard work so they can get that “thing” someone else has, whatever it is. But it doesn’t always pan out. There’s a sense of unfairness to it, and that’s where these “leaders” pounce.

Instead of appealing to ideas, they appeal to this feeling of unfairness. They pit one group against the other based not on the merits of their position, but on the fact that “we” don’t have what “they” have. They blame the other group’s existence for their ails. They make it seem as though the only way that other group has what it has is because they somehow took it from “us.” Or, “we’re where we are today because they did this or that.”

Now there is a flip side to all of this. Sometimes that other group did actually do something unfair and took advantage of another group. Some of histories greatest movements were built on a righteous cause to balance a fundamental unfairness. Millions and millions of people have benefited from the drive of people who worked to get “that thing someone else has.” The problem is when that drive is co-opted by corrupt “leaders.”

Our challenge as individuals is to figure out who they are.

Sometimes it’s easy. Does the person frame almost everything as “us vs. them” instead of laying out how his or her position is a better alternative? That’s the negative campaign. That’s a red flag. All too often, though, it isn’t that simple. We must always be aware of underlying motivations. We must never assume the “leader” is using the same definition for terms as we are. We must never accept as fact, without evaluating the situation and making the determination ourselves, that the target of the negative campaign is to blame for whatever the “leader” is claiming to be the problem.

Most importantly, we must always look within ourselves to make sure we’re not joining the mob being whipped up by these “leaders” because we’re looking for an easy way to get that “thing” someone else has.