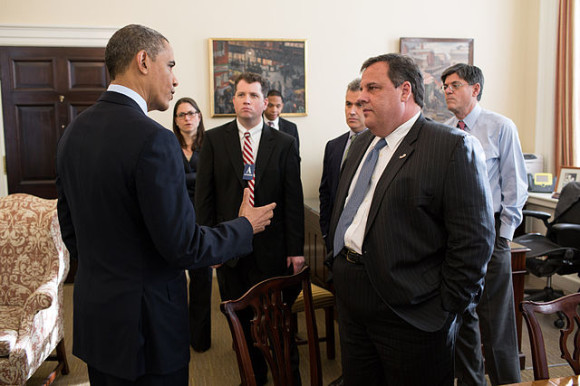 New Jersey Governor Chris Christie is the gift that keeps on giving to President Obama.

In the weeks leading up to the 2012 election, Mitt Romney was gaining in the polls. It appeared to some observers that he had a chance of becoming the 45th president.  Privately, the Obama campaign was concerned as well.

On October 29, 2012 Hurricane Sandy was downgraded to a tropical storm before making landfall in South Jersey. Although weakened, Sandy packed a powerful punch. The devastation was felt as far north as Connecticut. Not one to let a good crisis go to waste, the Obama camp was frantically looking for an opportunity to look presidential in the aftermath of the storm. Mayor Bloomberg told Obama they had their hands full and he should not go to NYC. Other tri-state leaders also rebuffed the administration’s overtures.

Except for one. Remarkably, days before the presidential election, Republican Chris Christie was more than willing to give Obama his much desired photo-op.

The Obama-Christie hug and the ensuing acts of bipartisanship in the days that followed are seen by many as the much needed push that helped Obama win reelection.

After the election, the Obama-Christie bromance continued on matters related to the recovery. The House passed a Sandy relief bill and sent it to the Senate for what seemed to be a formality. Not surprisingly Harry Reid loaded the bill with several pork projects including $8 million for new cars for Homeland Security and the Department of Justice, and another $150 million earmarked for fisheries in Alaska.

John Boehner and House Republicans vehemently protested all of the added pork and insisted the bill be stripped of everything not impacted by the storm. An angry Christie demanded Congress to “do their job” while never acknowledging that the bill was full of pet projects for the Democrats. The Obama media quickly jumped at the opportunity to portray the GOP as playing politics with funds needed to help storm victims. Christie’s attacks of the right further angered Republicans who were still seething over the governor’s cooperation with the president before the election.

Fast forward to January 2014. President Obama’s approval numbers are at historic lows. The economy and jobs situation continue to perform well below expectations. Then last week Robert Gates released his memoir Duty: Memoirs of a Secretary of War — a critical account of the Obama administration’s handling of the wars in Iraq and Afghanistan. The initial reaction in the media was shock and awe. It was clear there were many embarrassing and potentially damaging revelations that would require more than one news cycle to digest.

What a stroke of “luck” it was for President Obama when the Bridgegate story broke the next day. The once Christie-friendly media immediately pounced on the opportunity to divert attention away from Gates’ memoir and attack GOP presidential front-runner Governor Chris Christie.

No one is arguing the George Washington Bridge lane closures don’t warrant a full investigation. However, this 4-day traffic nightmare pales in comparison to the numerous scandals during Obama’s presidency. Many in the press have either ignored them or have provided political cover for this President. Regardless of where one stands on the validity of these events, the fact is, the mainstream media has spent little or no time reporting on them. The hypocrisy of these paid professionals is undeniable.

When Christie first learned of the Bridgegate emails he took immediate action. He didn’t go to bed — he didn’t go campaigning the next day. He didn’t blame it on a video. He investigated it. Within 24 hours he came to the conclusion that members of his staff orchestrated the lane closures. He promptly fired his Deputy Chief of Staff Bridget Anne Kelly “because she lied to me.” He held a 2-hour press conference to publicly apologize to the citizens of New Jersey while taking full responsibility. The same day he met with the mayor and the citizens of Fort Lee to apologize in person.

This is how a true leader responds to a crisis.

Obama never apologizes for mistakes made on his watch. No one is ever held accountable. They get promoted. If Christie learned anything as a result of this scandal, he must understand the gloves are now off. After downplaying every Obama scandal, the media saw blood and will do whatever is necessary to destroy Christie’s 2016 presidential run. Bridgegate was just the beginning.

So much for bipartisan hugs.