“We have broken through the partisanship and the gridlock, and we have reached a deal,” Democratic Sen. Patty Murray of Washington.

Americans voted for gridlock. Wanting these proven incompetents to get anything done is like wishing the Death Star was fully operational while living on Alderann.

So the deal is:

“The agreement, dubbed the ‘Bipartisan Budget Act of 2013,’ would spend $1.012 trillion in the current fiscal year and $1.013 trillion in FY 2015, according to a summary of the agreement. It will rollback $63 billion of planned spending cuts between this and next year. The funding measure will not tackle mandatory spending (ie. entitlements), nor does it raise the debt ceiling.” — United Liberty

You had one job — keep the spending cuts that were agreed to by law. 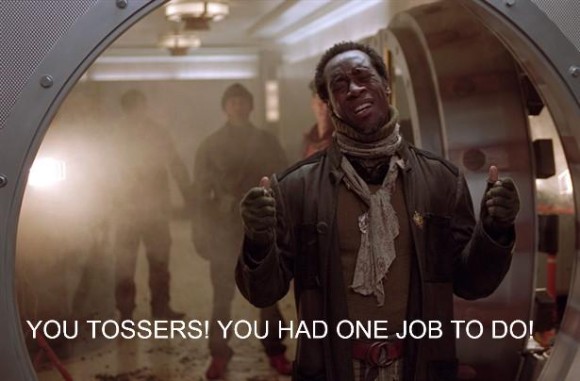 The chorus to accept this deal has started. Oddly though, these are the same people who touted arguments during the shutdown like:

It’s clear, though, that Boehner thinks spending levels are a battle the GOP can win. “The president’s threat to shut down the government if we implement his sequester is not a defensible position,” he said. “The American people won’t stand for it, and we’re not going to be swayed by it.” – John Boehner

“I’m also confident that we’ll be able to announce that we’re protecting the government spending reductions that both parties agreed to under the Budget Control Act, and that the president signed into law. ‘That’s been a top priority for me and my Republican colleagues throughout this debate. And it’s been worth the effort,’ McConnell said. ‘Some have suggested that we break that promise as part of the agreement. …  But what the BCA showed is that Washington can cut spending. … And we’re not going back on this agreement.’ Rep. Jim Jordan, R-Ohio, called sequestration, ‘one of the good things that has happened’ and ‘an important thing that we have achieved. Rep. Kevin Brady, R-Texas, even threatened another debt ceiling standoff in the new year should Democrats try to undo the sequester.” — Post Shutdown: Republicans and Sequester: A Love Story

If you noted that Obama had the upper hand in repeal, b/c it was the law, you'd have to say GOP had the same since sequester was law..

As a reminder, the draconian cuts that brought the Republicans to the table to dismantle what they had presented as an achievement — well, I am not sure that the Pentagon would have even noticed the cut.

Because of its persistent inability to tally its accounts, the Pentagon is the only federal agency that has not complied with a law that requires annual audits of all government departments. That means that the $8.5 trillion in taxpayer money doled out by Congress to the Pentagon since 1996, the first year it was supposed to be audited, has never been accounted for. That sum exceeds the value of China’s economic output last year.

I look forward to what the narrative will be regarding why it’s good that we are spending more money in the next two years than we were yesterday. The “out years” sure look like where actual governance will have to occur. I’m sure millennials appreciate the can being kicked in their faces one more time.

But then again, I’m in Kevin Williamson’s camp (“Bring on the Draconian Cuts”) and I’m old enough to remember August (WSJ’s Moore:  Sequester Has Already Succeeded Beyond Expectations).

Further, what is the GOP Brand exactly going into 2014 ?  Sadly it might be what  Sean Davis highlights:

Republican lawmakers should not fall for this nonsense. Why? For starters, because the people swearing to uphold new caps ten years from now are the same ones eviscerating the caps they agreed to barely two years ago. If they can’t be trusted to keep short-term promises, why on earth should they be trusted to keep long-term ones? A great way to show you won’t be trustworthy tomorrow is to break your word today.