Yahoo! Finance had an article recently about Walmart’s pay practices versus its payments or distributions to shareholders.

Walmart spent $6.6 billion on buybacks in 2013 and another $3 billion on dividends just for Walton family members; Demos senior policy analyst Amy Traub says the money would’ve been better spent giving Walmart workers a raise. Traub recently co-authored a report that concluded if Walmart and other major retailers raised the average salary of their full-time employees to $25,000 per year “it would lift 437,000 women and their families out of poverty and create more than 100,000 new jobs in addition.” The idea that raising wages will lead to more jobs is counterintuitive (and unproven) but Traub says it would be good for Walmart and other retailers.

“We find boosting these jobs really lifts up the companies as well, because it increases productivity, increases sales — which is what Walmart in the U.S. needs more than anything — and it reduces costs associated with employee turnover,” she [Traub] says. “At same time, it puts money into the hands and pockets of workers that are going to go out and spend it immediately.”

Traub proclaims that a hike in Walmart’s employees’ salaries would increase productivity and sales, reduce employee turnover, and will just come back to Walmart anyway because the employees will just spend it at Walmart anyway. The living wage is a panacea! Traub’s white paper is all sizzle (more like sputter) and no steak:

Last year, Walmart spent more than $6.6 billion repurchasing shares of its stock, bumping up earnings per share and consolidating ownership among the Walton family heirs. But the company’s performance slumped anyway as weak consumer demand, operational problems as a result of understaffing, and federal cuts to the food stamp program (a critical source of revenue for Walmart) undermined sales. Media and market analysts identified Walmart’s own human capital management practices as a central factor in execution failures at US stores

So what? The authors imply that stock buybacks are a bad thing because the Walton family owns a lot of stock in Walmart. Perhaps the Walton Family is the new Kochs Brothers. Traub’s analysis assumes a lot of things which are problematic, non-nonsensical, and antithetical to a free market. Here are a few problems with Demos’ position:

Traub gets the incentives backwards. Increased pay should be a result of increased productivity, not vice-versa. Rather than rewarding Walmart employees who are productive with higher pay (typically through a promotion), Traub and company posit that Walmart should pay their employees more in return for future promises of productivity. This might work if the economy was booming and employees had their pick of jobs. However, in Obama’s crap sandwich economy, low wage, low-skilled workers are not going to have the upper hand here. It’s a harsh reality. The answer to this is harder work. If you bust your ass, people notice. If they don’t notice, bust your ass somewhere else. ‘Merica.

Raising wages without an increase in productivity (i.e., profit) raises costs of doing business. I’ve talked about this concept here on more than one occasion. If companies are forced to pay a higher wage, the costs will “trickle down” to the consumer, thus removing any “gain” in the wage received. It’s beyond naive for Traub to assume that Walmart simply would divert the billions that it spends on stock buybacks to pay its workers more “just because,” and not seek to recoup that lost revenue in another way.

Companies who reward shareholders like Walmart are few and far between. I have no opinion on Walmart’s stock price (and this shouldn’t be construed as investment advise), but I understand the fact that when Walmart spends money on stock buybacks and dividends, it is rewarding shareholders. Also, it should be noted that Walmart’s shareholders are not simply the Walton Family. For example, CalPERS, the California Public Employees Retirement System, is one of the top holders of Walmart’s stock, owning over 5 million shares at the end of March, 2014. Every time Walmart pays its shareholders a dividend or buys back some of its stock, CalPERS owns more and more of Walmart. The same goes for people who own Walmart in a 401(k) or IRA mutual fund, or buy Walmart on the stock market and hold it in their portfolio. Walmart’s stock is up over 50% since 2009. Buybacks are also a way to return capital to shareholders without creating a taxable event. A shareholder needs to pay tax on dividends. They need not on a buyback.

Walmart owes nothing more to the employees of Walmart than a wage for time worked. Walmart pays well over the minimum wage in the booming Bakken Shale area of North Dakota. 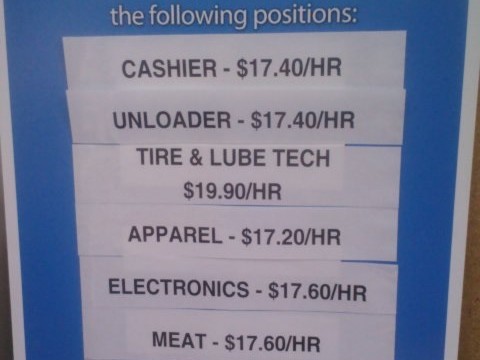 Via Mark J. Perry at AEI (h/t Lachlan Markay), Walmart is paying $17.40 per hour for a cashier in North Dakota. Why? Because the economy is booming (thanks to the oil and natural gas boom in that area) and they need employees. Walmart simply would not be able to compete in Williston, North Dakota, if they paid minimum wage. The economy is so hot up there that cashiers are making more than the so-called “living wage” that the left touts. Rather than complain about wages being too low, we need to focus on lifting cumbersome restrictions on business so that high paying jobs can be created by the market, not government fiat.

Indeed, mandating higher wages simply outlaws employment under that dollar amount and causes more problems than it solves. Of course, if Walmart is not competitive in terms of the wages paid, benefits, working environment, etc., the workers will not perform well (or the better workers will, in theory, leave). So there is a balance that needs to be applied here. I trust Walmart to strike that balance, as the company knows its business better than some people at a left-leaning think tank. If Walmart doesn’t strike the proper balance, its business will suffer (or continue to suffer). Markets work–look at North Dakota.