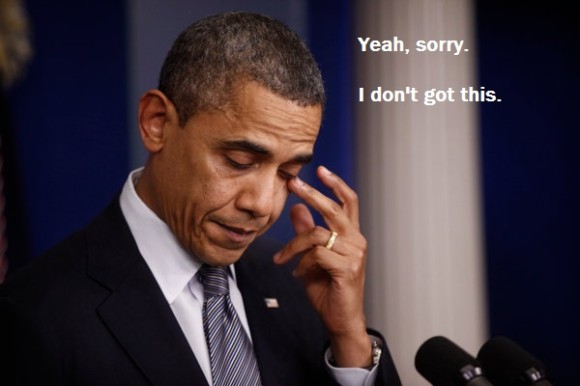 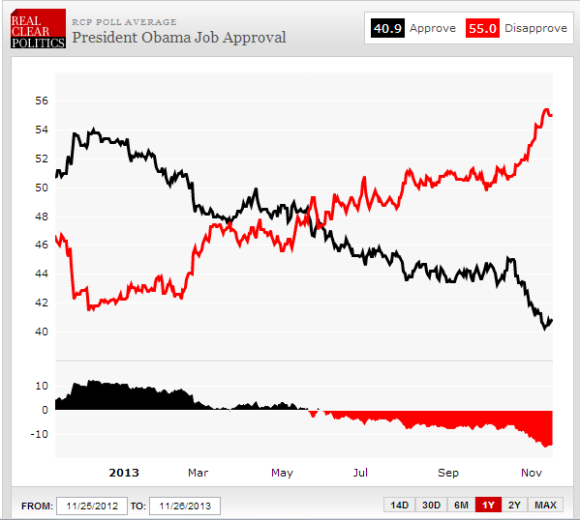 The President’s approval numbers have been dropping steadily since the summer started. But take notice of the sudden spike upward in disapproval starting around October 1. That’s when ObamaCare was rolled out.

That chart is why Democrats are panicking. They’re attempting to try and put a brave face on it. But behind closed doors they’re running around palms up trying to figure out a way out of this mess they created for themselves and the country.

They rammed a massive restructuring of the health care industry through on a 100% party line vote and now they’re looking for scapegoats. In the last month and a half they’ve accused Republicans of sabotaging the website and the law itself. They’ve callously called people complaining about losing the insurance they liked liars. They’ve blamed government procurement processes for making it harder to implement the website when they had three years to get it right.

Last week, in an effort to appease the base, Harry Reid nuked the Senate. This weekend, Obama announced a “deal” with Iran on their nuclear program. Many have noted that the deal seemed rushed, presumably because the President badly needed a “win” in the PR department. Things are bad in DemocratLand. And they’re getting worse.

A recent CNN poll is nothing but bad news for Obama. Here are some highlights:

This is an amazing turnaround in public opinion. Obama literally won re-election on the power of his personality and the fact that people liked him more than Mitt Romney. In almost every other aspect, people thought Romney was a more competent leader. Team Obama was able to paint him as an evil and out of touch plutocrat.

Buyer’s remorse has set in. Big Time. It’s made worse by the fact that regardless of what people thought about Romney personally, one thing that every could agree on was that he had a track record of managing things successfully. And I suspect that people are now seeing that is exactly what the country needs and isn’t getting with this administration.

Personality can only mask incompetence for so long.

Another recent poll indicated that if the election were held today, Romney would win. Yes, it’s a hypothetical and that always gets discounted vs people actually casting ballots, but the point here is the fact that the public has soured on Obama, to put it mildly. He’s losing support within the various groups his re-election team was able to cobble together to win enough votes.

What does this all mean?

It means Obama and ObamaCare have become toxic. It means that a window of opportunity has opened up for the conservative movement. It means the country is giving some major side-eye to the type of Big Government liberalism that Obama and the modern-day Democrats represent.

It means there’s still hope we can right this ship before America becomes just another failing statist country like those in Europe and elsewhere.