Sadly enough, California is becoming a microcosm for the problems in America:

California Governor Jerry Brown, who decries a widening gulf between rich and poor, is campaigning for a fourth and final term presiding over a state that’s outpacing the U.S. in producing both millionaires and food-stamp recipients.

The number of households with more than $1 million in assets gained 3.6 percent since the Democrat took office in 2011, compared with 3.5 percent nationally, according to Phoenix Marketing International’s Global Wealth Monitor. Food-stamp use rose 18.2 percent in the period, almost twice the nation’s 9.4 percent, U.S. Agriculture Department data show.

Of course, Jerry Brown thinks that in order to address this issue, he simply needs to raise the minimum wage to $10 an hour by 2016. As readers of this column know, raising the minimum wage is bad policy and simply prices unskilled workers out of the job force, cuts their hours, or results in automation.

Wait — are you some sort of liberal complaining about income inequality?

Fear not, dear reader. The problem as I see it is not the fact that the “rich” are getting “richer.” The problem is the disappearing middle class. California is an example, but this is happening in many states. However, the root of this problem is the same.

People in California are starting to notice this trend, too:

“We have an increase in poverty and high-end earners and a decrease in middle class jobs,” said Rob Lapsley, president of the California Business Roundtable, a Sacramento-based group that’s criticized the high cost of doing business in the state.

In California, for example, more middle class folks are leaving San Francisco than are moving to San Francisco according to Census data:

A net of about 5,075 individuals earning between $35,000 and $74,999 annually moved out of San Francisco between 2007 and 2011, according to Census Bureau data from those years. That number is about 40 percent more than the 3,654 people in the same income bracket that moved into the city during those years.

Large chunks of those middle income-earners departed the city for nearby Bay Area counties, including over a thousand to Alameda County just across the bay.

At the same time, as the poorer and middle class leave California, richer folks are moving to California:

Over the past two decades, a net 3.4 million people have moved out of California for other states. But contrary to conservative lore, there has been no millionaires’ march to Texas or other states with no income tax. In fact, since 2005 California has experienced a net in-migration of households earning more than $200,000, according to the U.S. Census’s American Community Survey.

What do we make of this?

1. Government regulation hurts the middle class by hurting industries in which middle class folks would otherwise be employed.

California has been a big beneficiary of the technology boom, from the dot-com bubble in the late 1990s to the current expansion of technology in the recent years (think social media, Google, etc.) This is a good thing for sure. However, the problem is that these jobs typically require advanced degrees and are not traditionally “middle class jobs.” Again, there isn’t necessarily a problem with this. However, when you mix in the excessive regulations that raise the costs for manufacturers to do business, said manufacturers leave the state. Money goes where it is treated best — as do companies.

2. The cost of living is becoming prohibitive for the middle class.

It also should be noted that the cost of living in California is extremely expensive:

Housing in California is on average 2.7 times more expensive than in Texas. The median house costs $459 per square foot in San Francisco and $323 in San Jose, but just $84 in Houston, according to chief economist Jed Kolko of the San-Francisco based real-estate firm Trulia. Housing in California is cheaper inland than on the coast, but good luck finding a job. The median home in Fresno costs $95 per square foot, but the unemployment rate is nearly 15%, compared with 6% in Houston.

What middle class person can afford to pay $459 per square foot for housing in San Francisco? It’s not just housing either. Government-sponsored inflation is causing prices to rise in food, health care, education, and fuel. This brings the middle class down by reducing the dollar’s purchasing power. Granted, the high cost of housing in California is most likely due to the tech industry demand. That in itself is not necessarily a “bad” thing, but combined with the lack of middle class jobs — someone without an advanced tech degree will quickly find themselves out of a job and unable to afford housing. The natural result of this will be to move to where the middle class jobs are. That ain’t California. 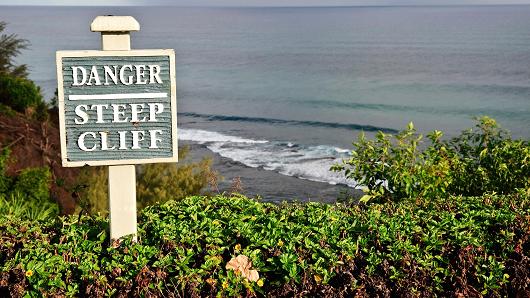 Sadly, in Obama’s America, there are strong disincentives for work — or, perhaps, at least working to earn above a certain level. This is not hyperbole, considering how the Administration has lauded the end of “job lock” and encouraged folks who “only” worked for health insurance to be free from the shackles of employment (on the taxpayer’s dime, of course).

This chart from the excellent financial blog Zero Hedge says it all: 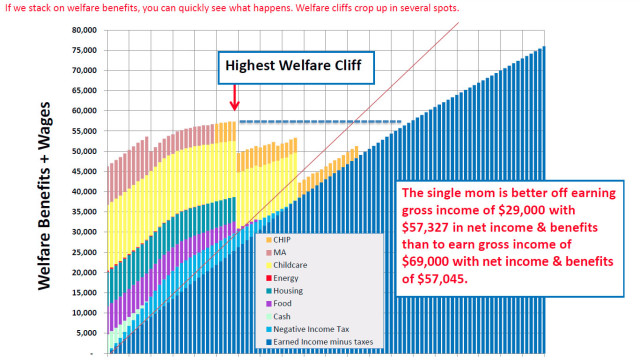 Earning a lower income — when factoring benefits (from Pennsylvania, for example) — means that you have more money than a family earning much more income. This is because of the so-called “subsidy” cliff, where subsidies abruptly fall off at arbitrary levels. If you are close to those income levels, a bonus, a raise, or other income windfalls could severely impact you financially. In terms of Obamacare, earning $62,040 entitles a married couple in Wisconsin to health care that costs over $13,000 less than if they earned $62,041.

Such arbitrary lines in the sand are counterproductive to folks striving to earn more money to improve their station in life. Combine this with higher cost of living and job-killing regulation and, soon enough, we will wonder what happened to the American middle class.

There is a lot of economic data coming out this week, including jobless claims, consumer sentiment, producer price index, etc. that can move the market. Be on the lookout for the market to react to the speeches given by Federal Reserve Bank members after last week’s jobs report, too.