It’s very easy to play the “outsider” when you haven’t held a particular office before. If you’re a candidate you claim to represent the “grassroots” and promise to get to DC and fix everything.

Does that sound familiar?

Carl Domino is running to unseat Patrick Murphy in the 18th Congressional district of Florida. He first must get past a GOP primary August 26th. Domino, while attempting to paint himself as an outsider, is actually the ultimate political insider.

A protege of one Charlie Crist (Domino was an honorary chair of Crist’s failed 2010 Senate campaign), Domino served in the Florida House of Representatives for 8 years (2002-2010) and only stepped down because of term limit laws.

As such, Domino (who turned 70 in April) fancies himself as some sort of rebel looking to change the culture in DC when in fact he would probably fit right in. It’s why the “plan” he is touting is do ludicrous that it defies all sense of reason and logic.

The plan is nothing more than pandering tripe.

If that is wrong and Domino is really serious about this plan, then he is leaving himself open to a wide range of criticism. The one aspect of his plan that is completely unworkable is the part about members of Congress being paid the median level of pay in their districts.

It’s easy for Domino to accept such terms for himself. He doesn’t need the money. You see, Mr. Domino is a millionaire. He would easily be able to get by on the $50,000 salary he would earn as a Representative of Florida’s 18th Congressional district. However, take a look at some other districts: 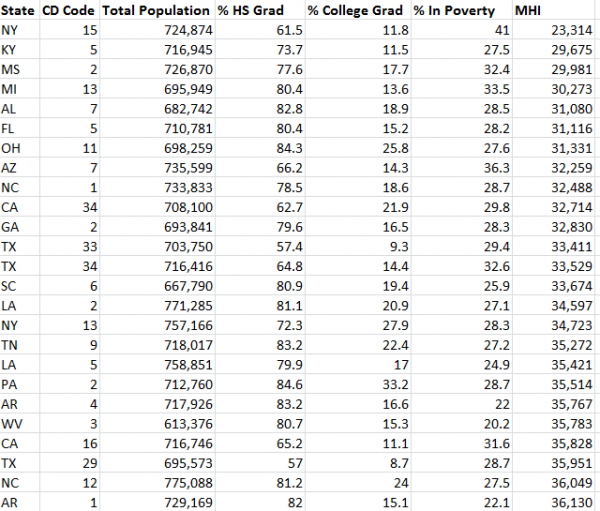 One could argue all day about the ineffectiveness of Congress and the job they do but the fact is, these men and women do work long hours. They do spend a considerable amount of time away from home. The salary they currently receive is pretty fair. Yes, their positions come with all kinds of perks (such as being able to book multiple flights but only pay for the one they use).

That said, who would want to work that kind of job, for that those kinds of hours for $30,000 per year. Remember, it is a full time job.

The other part of Domino’s plan that doesn’t pass the sniff test is his idea for banning former members of Congress from every being lobbyists. Domino may want to head back to law school and take a constitutional class because he seems to have forgotten about one very important amendment.

Lobbying is just another word used for petitioning. People complain about lobbyists all the time the way they do lawyers. That is, until they need one. We would like to think that all lobbying is done by well to do fat cats (Like Carl Domino!) but there are many civil and local organizations that employ the use of lobbyists to make their case on Capitol Hill.

Domino’s plan would be struck down moments after it passed (which would never happen anyway).

Democrat Patrick Murphy is not representing Florida’s 18th Congressional district well. He supports Obamacare and supports raising taxes. That district needs somebody that will propose some serious solutions during their tenure.

Carl Domino’s silly “fix” for Congress is the solution.

Rachel Mullen has more on this over at Third Base Politics.