Last week one of the best television shows of all time –of all time, I tell you – ended its run. The story of mild-mannered chemistry teacher Walter White’s transformation into a meth kingpin is fraught with tension, drama, violence, and at the end of it all a genuine and profound regret. It is a tragedy in the classical sense, wherein characters hasten toward an inevitable fate brought on by the stubbornly prideful choices they make.

Naturally, it provides excellent fodder for making fun of our esteemed political class. Without further ado, I present to you the PFoL Awards – Breaking Bad Edition:

Early on in the show Walt receives a crushing piece of news that leads him to reexamine his life and priorities. He reconnects with a former student, a burnout meth cook, and realizes that he can make piles of cash by using his advanced chemistry knowledge to produce a superior-quality meth. When the burnout asks the obvious question – “Why?” – Walt looks off into the distance and says that for the first time in his life he is “awake.” Meaning of course, that he feels alive for the first time in years.

This award is presented with love and affection to the American people, all of us, who after the debacle of the government exchange rollout should be wide awake and taking a good hard look at what our expectations for government are. Can we even get access to the sweet, sweet meth of government assistance? Based on the initial roll-out, we might need to tweak some things.

As Walt becomes involved in criminal enterprises, he is forced to do more and more dastardly things in order to survive and assure that his work gets the respect it deserves (and he gets his money). He develops an alter ego for dealing with the criminal element, and names himself Heisenberg. Heisenberg is a bad dude. When Walt puts on his black hat, he really seems to become another person.

Later in the series, Walt’s wife (understandably concerned about his lifestyle) expresses her fears and begs him to stop. Indignant at this, Walt makes an iconic speech:

Who are you talking to right now? Who is it you think you see? Do you know how much I make a year? I mean, even if I told you, you wouldn’t believe it. Do you know what would happen if I suddenly decided to stop going into work? A business big enough that it could be listed on the NASDAQ goes belly up. Disappears! It ceases to exist without me. No, you clearly don’t know who you’re talking to, so let me clue you in. I am not in danger, Skyler. I am the danger. A guy opens his door and gets shot and you think that of me? No. I am the one who knocks!

This award goes to a menace that threatens to disrupt all our lives, in ways big and small. An amorphous danger, with consequences we cannot yet see. Will it turn out all right for the characters we’ve come to identify with? Or will this course of action lead to their doom? Without further ado, allow me to present this award to the Government Shutdown! 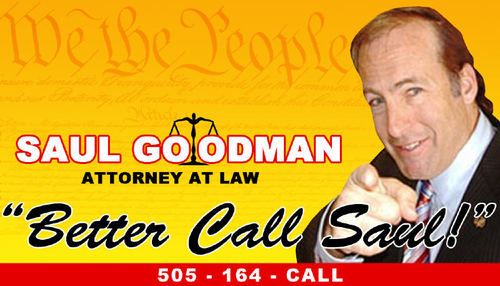 Any tragedy must be leavened with a bit of comedy, or it becomes a relentless slog. In Breaking Bad’s case, that humor was provided by Saul Goodman, a sleazy lawyer of the sort you see on billboards and cheeseball commercials. The only difference is, this guy is actually a fairly connected criminal in his own right. He is ultimately drawn into Walt’s ongoing drama and gets him out of some tight scrapes, but his powers are not infinite.

This award is thrown in the face of Harry Reid, who can eat it for all I care. Saul Goodman might not even be able to help this guy after the bonehead essentially wrote off kids dying of cancer because he doesn’t want to negotiate on mini-funding bills that Republicans are proposing. “Why would we want to do that,” indeed, sir. For shame. But hey, Saul doesn’t judge.

You knew this was coming, if you watch this show. How could it not? Jesse Pinkman is the burnout Walt turns into his lackey and protege. Over the course of the show they have their ups and downs, mostly downs, as they have to work together to escape trouble and grow their business.

Anyway, Pinkman is not an altogether refined young man, and one of his favorite exclamations (whether in triumph or as an insult) is “Bitch.” It is a meme. You can Google it!

This award is presented to a group of people who indisputably triumphed this week. Who added one more victory to their impressive record. Who didn’t let a little thing like an impromptu barrier set up by a supposedly “shutdown” government stop them.

I’m speaking of course of the WWII veterans who politely ignored the ridiculous gates set up to block access to their memorial. A memorial which, I might add, is completely open air and open to the public 24 hours a day (but only staffed until 11 pm). Count on men who beat the Japanese and Germans to not let a park ranger stand in their way.

For basically giving the ninnies playing shutdown theater a resounding, “Whatever, BITCH” the veterans of WWII are presented this esteemed award. I’m sure it will look nice next to their, y’know, medals and stuff.

Thanks for being with us today! Hope to see you again for the next PFoL Awards. And remember, don’t do meth. Really, don’t.