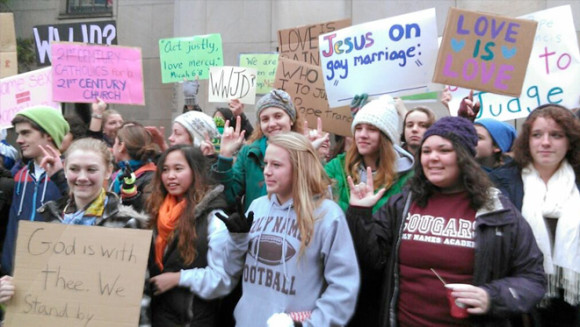 Another flash-point in the ongoing conflict between traditional Christian thought and an American public that is increasingly hostile to it, this time out of Seattle. A gay vice-principal and swim coach at a Catholic secondary school resigned after his employer, the Archdiocese of Seattle, learned that he had married his same-sex partner.

This was a clear violation of his contract, as well as Catholic social teaching.

Pretty open and shut case, wouldn’t you say? Perhaps you would, but you are not one of the spectacularly ignorant teenagers taking to the streets to protest the decision. The protest has spread to other high schools and grievance groups in the area; naturally, since the Intolerance Police smell a rat.

“It’s almost 2014. We need to get over this barrier. We need to accept everyone for who they are,” said one particularly dumb person who will one day be allowed to vote. A perfectly nice sentiment, though entirely without bearing on the matter.

No doubt the youngster fails to appreciate the fine distinction between accepting a person for who they are, and accepting their sinful behavior. Churches are generally very concerned with sin. Why, they even still believe in it, and it’s almost 2014!

Obviously the answer for the students and their enablers in the Seattle area is to protest not just the firing, but also the Church’s very teaching on same-sex marriage. More than 15,000 people who haven’t thought about the issue very deeply have signed what will almost certainly be a very effective online petition to change the Catholic Church’s position on gay marriage.

“So many people are saying we need to change these rights,” one actual student of the school of about 900 declared. “[Zmuda] shouldn’t be fired because he’s gay. He should be staying with us.”

Another lovely sentiment, though Mr. Zmuda was not fired for being gay.

He resigned after violating the terms of his contract with his religious employer, a Catholic school (albeit one where only 60% of the students are actually Catholic). One presumes that Mr. Zmuda was very aware of his employer’s views on the subject of same-sex marriage, given that the Church has been fairly well-established in many countries for some two-goddam-millennia.

The students cannot reasonably expect the Catholic Church to do an about-face on this issue. What they can do, in concert with myriad other aggrieved simpletons, is push the Church and other Christians out of the public square. When it becomes prohibitive for Catholics to operate public services and live their faith, we will withdraw from the public. That includes not only the Catholic school system (which, dirty secret, serves poor and disadvantaged non-Catholic children to an incredible degree) as well as hospitals.

I’m sure the Arbiters of Toleration will be glad to see the back-end of us, but good luck finding a group of suckers with the same commitment to serving the least among us.

Coming on the heels of the recent strides made by polygamists and gay-marriage advocates in Utah (Utah!), as well as the suspension of a well-known reality television performer over his comments labeling homosexual behavior a sin — this episode only further highlights the tension in our country between those who preach tolerance and those who actually practice it.