The federal government has a huge spending problem. We hear about it in the news constantly, but how big a mess is it, and can it be fixed?

Generally speaking, a budget is the best way to manage income and expenditures. From a single person to an entire country, budgets allow for the user to manage and use their money in the wisest possible manner. Budgets don’t have to be that complicated. There are typically three components: Projected money spent, actual income and actual money spent.

Projected money spent is an educated prediction of how much money one will spend to cover all obligations such as bills and interest payments (on debt owed) assuming a certain income will be achieved. A conservative budget will also factor in savings to cover potential surprise expenses.

Or at least it was for a brief second. The website, US Debt Clock, calculates the increasing debt second by second. It’s both impressive and depressing to watch. This doesn’t include future debt that is known, such as Social Security, Medicare and Medicaid, also known as unfunded liabilities, which are about one hundred forty trillion dollars ($140T) at the moment. Even though the US government may pass a balanced budget, it will take the discipline of a thousand nuns to even begin to pay off the debt owed.

Federal spending has been around since 1789, when the Founding Fathers created it in the Constitution, Article 1 sections 8 & 9, for starters. Congress has the power to collect taxes and spend that money to do all the things outlined in the Constitution that the federal government is legally supposed to do.  The federal government has carried surpluses and deficits since its creation. There wasn’t, however, a federal budget until 1921, when, under President Warren G. Harding, the Budget and Accounting Act was passed.

The Budget Act, as it is known, provided a national budget system and independent auditing. “This act meant that for the first time, the president would be required to submit an annual budget for the entire federal government to Congress. The object of the budget bill was to consolidate the spending agencies in both the executive and legislative branches of the government. – Wikipedia

The United States federal government has operated without a federal budget or partial budget from time to time.  The latest is from April 29, 2009 through January 17, 2014. “Each year, Congress must appropriate a specific amount of money to each department, agency, and program to provide funding for operations, personnel, equipment, and activities.  Traditionally, the United States House of Representatives and the United States Senate agree together on a budget resolution in the spring that is then used to determine spending limits for twelve regular appropriations bills. The twelve appropriations bills then appropriate the funding for the federal government to use for the next budgetary year. The appropriations bills must be signed into the law by the President, although the budget resolution itself is not subject to his or her approval.

If Congress fails to appropriate the necessary funds for the federal government, the government shuts down as a result of the Antideficiency Act. The law “forbids federal officials from entering into financial obligations for which they do not have funding,” such as buying ink, paying for electricity, or paying employees.

Congress can avoid a government shutdown by passing a continuing resolution (CR) instead. – Wikipedia

There are several reasons why the federal government is seemingly spiraling out of control in spending. First, like most household budgets, as income grows spending grows. Most people in the United States readily meet their household needs; food, water, shelter, clothing, electricity, transportation. As their income increases, needs continue to be met and wants manage to become “needs”. When the US government began, the Constitution outlined the “needs” of the federal government. As the US economy grew, the federal government’s wants turned into “needs” and those needs never seem to revert back to wants.

Another reason for the spiraling spending is that there are many hands in the pot. Every department under the Executive and Legislative branches has their own spending bills. Have you seen the size of the federal government lately? Each office has its own budget to cover payroll, office admin, furniture, paper; you name it. The small budgets roll up into larger budgets and the larger budgets roll up into appropriation bills. Each department of the federal government has an Inspector General’s office assigned to it, to monitor and investigate fraud and waste. This helps keep wanton fraud and waste at bay but budget creep still happens. 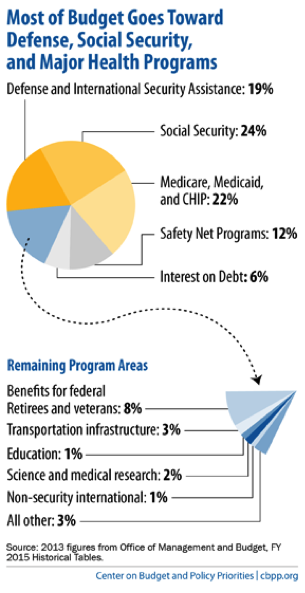 Finally, outside of its intended purview, the federal government has become a generous benefactor of the people. With the creation of Social Security, Medicare and Medicaid, federal spending has grown exponentially.  As of today, approximately 80% of federal spending falls under Social Security, Medicaid/Medicare, national defense and interest payments. The guiding notion is that once a budgetary line item is created, someone is at the receiving end of that line item, and the government can’t possibly default on this dependency they’ve created, even if it was meant to be temporary.

The federal government spending is a huge mess. If you are interested, you can help pay down the national debt at Pay.gov. They even take credit cards.

There are multiple theories on how to fix this problem. Paul Ryan came out with his plan during the 2012 presidential election called “The Path to Prosperity”.  Several conservative think tanks, such as Pew Charitable Trust, Brookings Institute, Heritage and AEI also have articles outlining and proposing changes to the budget process and methods for reducing the federal deficit and debt. Ultimately, if the US is going to get her fiscal house in order, major changes to entitlement programs are required, which takes a strong leader in the executive office and a strong will in the Congress because these changes will be loudly unpopular, for a while.

We, the People will need to embrace, once again, the ideal of personal responsibility and hold each other and our elected officials accountable to maintaining fiscal discipline.As with most things, it’s up to the American people to make the changes that are good and right for the future of our country, ourselves and our children.  Are we truly up to the task?