The Democrat Party is embarking on a foolhardy and nearly laughable strategy of attempting to attack Charles and David Koch as a means of thwarting potentially big losses in the 2014 elections:

Charles G. and David H. Koch, the billionaire brothers who are perhaps the best-known patrons of conservative Republican politics, are bespectacled and in their 70s. They look genial enough.

But Democrats are embarking on a broad effort that aims to unmask the press-shy siblings and portray them, instead, as a pair of villains bent on wrecking progressive politics.

On Thursday, the Democratic Senatorial Campaign Committee is starting a digital campaign that will use Internet ads and videos, as well as social media, to tie Republican Senate candidates to the policies and actions of the Koch brothers. Its slogan: “The G.O.P. is addicted to Koch” (pronounced coke).

Addicted to Koch? Well that’s original. It’s the kind of thing you see Twitter trolls engaging in along with brilliant name calling such as “Rethuglican” and “TeaPublican.”

Harry Reid, never one to shy away from smearing people in public, said the following:

“Right now, because of people like the two brothers, the rich are getting richer, the poor are getting poorer, and the middle class is getting squeezed out of existence,” he said. “They’re against everything that’s good for America today.”

Classy. For the record, here is a screen shot of all the horrible things the Koch brothers have done with respect to cancer research, the arts and education. Click on it to see the full size. 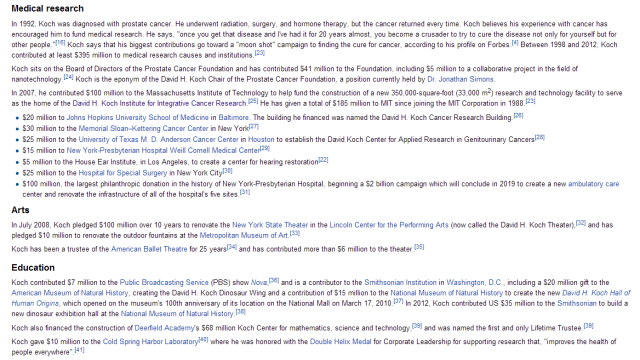 Good luck with that Harry!

And we have yet another Obamacare delay! I seem to remember this law being so urgent and the American people so badly needing it that a former Speaker of The House proclaimed “We have to pass it to find out what’s in it.” The President has now decided portions of the bill won’t be implemented until he is nearly out of office.

Another delay in Obamacare. Really? Like @Matthops82 said, time to update: pic.twitter.com/PtM6IorH4n 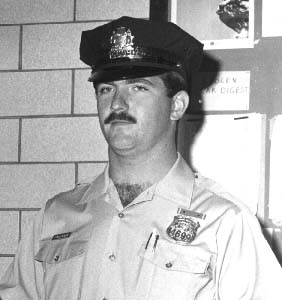 In a pleasantly surprising move yesterday, the US Senate blocked the nomination of an advocate for cop killer and left wing celebrity hero, Mumia Abu-Jamal. Debo Adegbile was nominated by President Obama to head up the Civi Rights Division of the Justice Department. Supporters of Adegbile argued he was just doing what lawyers do for clients but the fact of the matter is, he became an advocate for Abu-Jamal and all of his kooky conspiracy theories that came with it. This is a time when I’m glad there was some bi-partisanship.

Next Mr. President, don’t choose an advocate for a cop killer to head up an important division of the Justice Department.