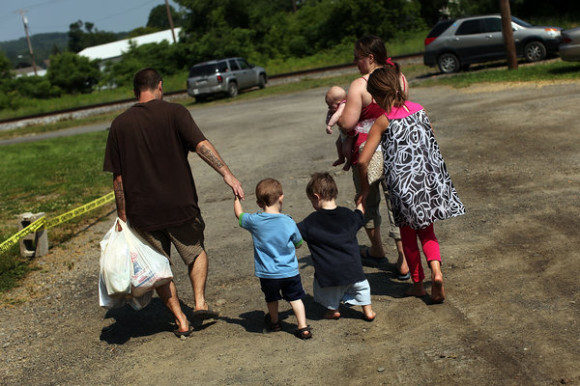 This administration today, here and now, declares unconditional war on poverty in America. I urge this Congress and all Americans to join with me in that effort.

The war that President Johnson declared just over 50 years ago, sadly, has failed.

The “war” may never have even been necessary. At the time Johnson signed the Economic Opportunity Act in 1964, poverty rates were already quickly falling in the United States. Whereas it was 22.4% in 1959, it had dropped to 19% in 1964. The the law was implemented, the poverty rate had dropped to 17.3%.

Supporters argue the drop from 17.3% in 1965 to 11.1% in 1973 is proof the programs worked. However, critics argue that strong economic growth in that decade deserved much of the success for lifting people out of poverty than any government program.

The real problem with the “war” is that after 1973, the poverty rate in this country always hovered consistently between 11%-15%.

This despite trillions spent on on anti-poverty programs and education. If there is any area where these programs have been successful, it has been the perpetuation of a permanent underclass in the United States.

When liberals are confronted with these failures, they almost always react the same way. In their world, not enough was done. That’s a parallel with that kind of thought that goes along with the question asked of a very rich man, “How much is enough?” His answer? “Just a little bit more.”

Liberals operate much in the same manner. They’ll never acknowledge the failure of their policies. They’ll say one of two things:

The Cato Institute did a study about spending to combat poverty. The full study can be found here but here is a small summary:

In 1964, the national poverty rate was around 19 percent and falling, while the current poverty rate is expected to be around 15.1 percent and climbing. It is now at the highest level in nearly a decade.

According to the Cato report, the federal government will spend more than $668 billion to fight poverty in 2012. State and local governments will spend an additional $284 billion, amounting to $20,610 for every poor person in America, or $61,830 per poor family of three.

$15 trillion. That’s  the measure of the gross domestic output of the United States for an entire year. Welfare spending has increased 32% since Obama took office.

Yet, Democrats claim there needs to be more. They want Medicare open to everybody. The President and fellow Democrats are pushing for increasing the minimum wage (at a time when job growth is anemic) to $10 an hour and are pushing for yet another extension in unemployment benefits.

The President has spoken a quite a bit lately of “income equality.” Yet he continues to push for policies that widen that gap of equality. He speaks of “working hard” and “opportunity” as do other Democrats, but should we believe their words or our own eyes when they brag about a fictional woman named ‘Julia’ who is shown going through her entire life holding Daddy Government’s hand?

The words of the President Obama essentially boil down to him saying, “You can’t find a good paying job. Do you know whose fault that is? It’s not my fault. It’s not your fault. It’s his fault (as he points at the executive driving a Mercedes). That person is holding you back. You deserve better.”

The President came into office in 2009 selling “hope and change,” particularly to younger Americans. Instead what they received was cynicism and the language of division. His policies have failed and he’s going to spend the better part of 2014 attempting to pit the have-nots against the haves. Unfortunately, many will buy into it, convinced “the man” is keeping them down and eagerly hoping for the life of Julia. They will likely spend a good part of their lives wondering why their situation is not improving.

For others, they’ve grown tired of the failures of this President and his party. Conservatives have an amazing opportunity here to sell younger people on the kinds of policies and ideas that will lead them to bigger and better things. The numbers in this latest survey of millennials are startling:

Recent data suggest millennials actually share more conservative views of government than the conventional wisdom, or even millennials themselves, would lead you to believe. Fifty-one percent of millennials believe that when government runs something, it is usually wasteful and inefficient. Eighty-six percent of millennials support private Social Security accounts, and 74 percent would change Medicare so people can buy private insurance. Sixty-three percent support free trade, while only 38 percent support affirmative action. When it comes to questions of the scope and purpose of the federal government, millennials would appear to have more in common with the Tea Party than with Julia and Pajama Boy.

The question is whether or not the Republican Party has the balls to sell it, particularly when the Democratic attack machine gets fired up. They can choose to sell younger Americans on the real American dream.

Or they can slowly fade into obscurity as we raise another generation of Julias.