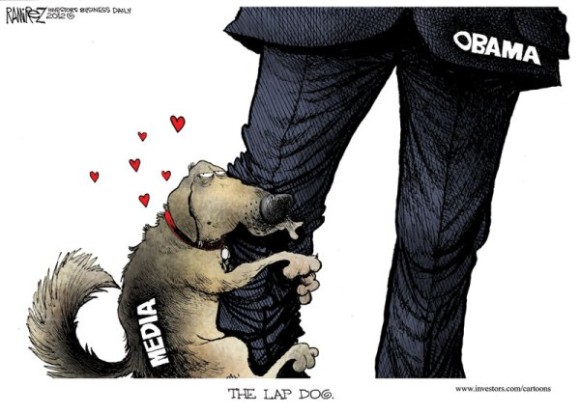 That’s right. The media did nothing in the wake of Obama’s constant promises. This just broke last night:

President Obama repeatedly assured Americans that after the Affordable Care Act became law, people who liked their health insurance would be able to keep it. But millions of Americans are getting or are about to get cancellation letters for their health insurance under Obamacare, say experts, and the Obama administration has known that for at least three years.

Four sources deeply involved in the Affordable Care Act tell NBC NEWS that 50 to 75 percent of the 14 million consumers who buy their insurance individually can expect to receive a “cancellation” letter or the equivalent over the next year because their existing policies don’t meet the standards mandated by the new health care law. One expert predicts that number could reach as high as 80 percent. And all say that many of those forced to buy pricier new policies will experience “sticker shock.”

Buried in Obamacare regulations from July 2010 is an estimate that because of normal turnover in the individual insurance market, “40 to 67 percent” of customers will not be able to keep their policy. And because many policies will have been changed since the key date, “the percentage of individual market policies losing grandfather status in a given year exceeds the 40 to 67 percent range.”

And in case you need to be reminded, here is a compilation video showing just how many times President Obama assured people they would be able to keep their plan and/or their doctor:

It’s been over three years and the media is just getting around to telling people (what conservatives have been saying for the last 3 years BTW), “Oh, here it is! That little regulation that says the Obama administration was well aware that millions of people would have their current coverage dropped! We are just so shocked!”

You want to know how awful our media is? Two weeks ago, CNN was writing about this:

Former Republican presidential nominee Mitt Romney cleared a final hurdle Friday in building a new house in California, a house that will include a four-car garage with an elevator for the vehicles.

Romney had already gotten zoning permission from the city of San Diego to demolish the 3,100 square foot home he owns in the La Jolla neighborhood and erect an 11,000 square foot mansion in its place. Plans for the home were put on hold until after the 2012 election.

They devoted resources to writing about a freaking car elevator.

If the media was curious they might begin to wonder what happens when the employer mandate kicks in. This is just the individual mandate…

She’s right. Has the press looked into that at all? I doubt it. After all, there are stories about Ted Cruz that demand press attention. Why burden “journalists” with looking into and reporting on one of the greatest entitlement expansions in history? Who wants to bother with that?

And why should Chuck Todd, George Stephanopoulos, David Gregory, or any other journalist investigate a claim Obama made from 2008 through 2012?

Oh that’s right. Because it is their job to do so. However, they’re so enamored with being part of “cool kids” club that they have abdicated the responsibility as those who are supposed to be skeptical of the claims made by politicians. All of them. Not just Republicans.

Sadly, the media behaving as apologists for the Obama administration continued just this morning as Chuck Todd went on Morning Joe and blamed… .insurance companies!

MSNBC chief political analyst Chuck Todd told Morning Joe Tuesday morning that President Barack Obama’s claim that people would be able to keep their health insurance under the Affordable Care Act was a poor promise to have made from the start, as it relied on insurance companies’ compliance, and was made even worse by the fact that the administration knew as early as 2010 that it would not be the case.

“At the time all of us said, ‘We’re highly skeptical of how he can make that promise,’” Todd continued. “Let’s look at our own company. We can’t decide to keep our health care if Comcast decides to change health plans. We’ll get a choice, we’ll get maybe an a or b or c, depending on different things. So when the president said it, basically only people on Medicare, TriCare, Medicaid could he keep that promise for.”

All of us said? When? What did I miss? Obama’s claim was never challenged by the mainstream press. They were too busy being awed by the glow of his wonderfulness to care that he was lying through his teeth.

The other spin you can expect to hear from Obama’s press sycophants is what started yesterday with David Axelrod and continued on Morning Joe with Eugene Robinson and Sam Stein.

“Oh, this only affects a small number of people in the United States. The majority of Americans get their healthcare through their employers so it’s really not that big a deal.”

Here’s a final question to ponder: what would have happened had the media done their job and informed 14-16 million people in 2012 that the President was lying to them? That up to 80% of them would have their healthcare plans cancelled and would be forced into new plans that would cost more and have higher deductibles. How do you think they would have reacted?