If one were to believe Al Sharpton (and there are many who are stupid enough to do so), police departments across the country loaded up with cops with itchy trigger fingers, just waiting to take out a target, particularly young black men.

Sharpton is even forming a “civil rights” march in Washington DC this weekend, absurdly calling for Congressional investigations into “police brutality.”:

“We’ve seen instances of police violence and misconduct across the country. It’s now not just an issue in one city or one state; it is an issue affecting places across the country,” said Janaye Ingram, executive director of National Action Network, which is organizing the march.
“This is the time to come together and lift our collective voices, and say to Congress, we need to see more action from them around police brutality,” she said.

The Sharpton civil rights group is calling for congressional hearings into the deaths in New York and Ferguson, Mo., hoping they’ll lead to legislation regarding police misconduct.

While the Justice Department is investigating the deaths of both men, organizers want Congress to enact legislation giving the DOJ more latitude when it comes to police killings.

“The Congress needs to not only do hearings, they need to deal with the jurisdictional threshold of how you make a federal case,” Sharpton said Sunday during an appearance with Garner’s widow on NBC’s “Meet the Press.”

Just as the left wanted to convince people mass shootings were on the rise to justify their gun grabbing (they’re not), they are now out to convince people that policy brutality and the shooting of unarmed black men is rampant across the country and demands federal intervention.

As is often the case, such claims usually don’t hold up under scrutiny. When it comes to Al Sharpton of course, nothing that comes out of his mouth can be believed. That fact that he’s a tax cheat, an FBI snitch, an anti-Semite and somebody that has incited deadly violence, should be enough to alienate him from almost any media outlet. But somehow he has been able to keep up a degree of respectability that even gets him advising the President.

That said, facts matter. And if the recently released NYPD firearms discharge report is any indication, Al Sharpton is going to have a hard time justifying federal intervention into police forces around the country. The statistics are pretty staggering, particularly the trends. The full report can be found here. First, here is a snapshot of 2013: 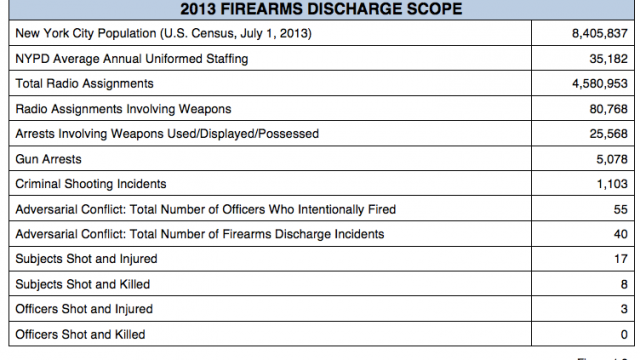 As you can see, despite the amount incidents involving guns and gun arrests, the police shot and killed a total of eight perpetrators in all of 2013. That’s pretty remarkable.

As I said earlier, the trends are even more remarkable. Here is a historical look at the number of shootings where a subject was shot and injured by an officer since 1971: 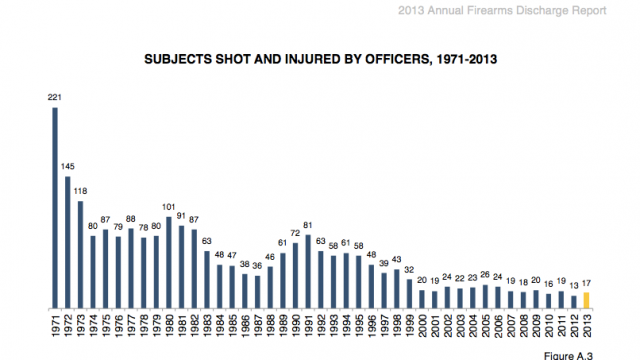 And here are the historical figures going to back to 1971 showing the number of shootings where a subject was shot and killed by an officer: 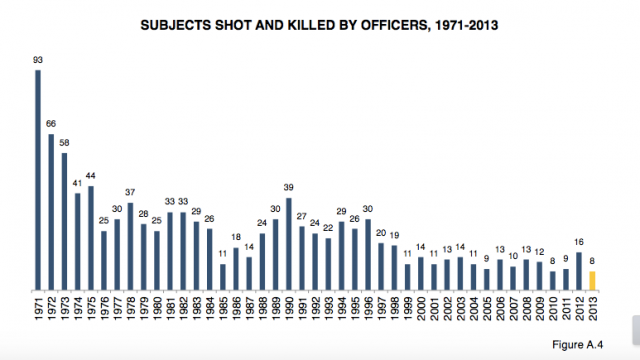 Except for a spike in 2012, levels have been pretty steady (and low) since the peak of the crack era. Finally, there is the geography of where these firearms discharges take place: 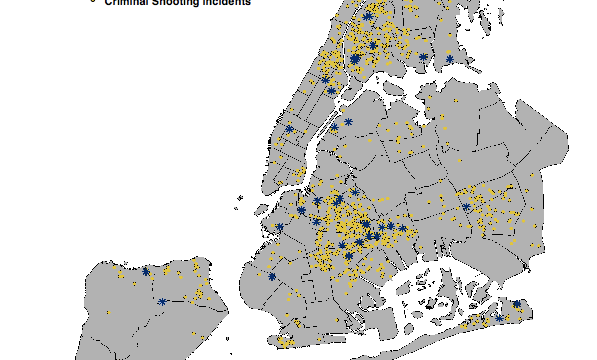 If you are not familiar with NYC, then I can just tell you that most of the firearms discharges are located in Brooklyn, the Bronx, and the upper neighborhoods of Harlem and Washington Heights in Manhattan. The blue areas denote where an officer discharged their firearm. The yellow denotes a criminal shooting incident. As you can tell, the criminals are doing a lot more of the shooting than the cops.

Chances are, if some reporters to were to do some digging around (you know….journalism and reporting) they’d find this trend is probably the same all around the country. Granted, the result of this rarity in shooting incidents involving police is obviously tied to the big drop in crime the country has seen in the last 30-40 years.

That said, the media is once again playing into the hands of the loudmouths and cranks who want to convince us all that black men at large are in danger of being picked off by the cops.

Are all police involved shootings legit? No. But the fact of the matter is, incidents like we saw with Mike Brown in Ferguson are very rare. Let’s hope that reason and facts win out over emotion and more importantly, the rabble rousing of frauds like Al Sharpton.