A lot of people are leaving Twitter these days. Social Justice Warriors aka Raging Douchebags have decided it is their duty to patrol the avenues of Twitter looking for something to be outraged about. Once they find it, they latch on to it like a Tijuana whore would a $10 bill.

Deray McKesson, who was relatively unknown prior to Michael Brown’s death is attempting to be the current day Al Sharpton. Basically it means he gets paid to be a rabble-rouser.  Chuck Johnson is an infamous Twitter troll who has made a name for himself “breaking” stories and releasing information about people not usually known to the public.

Johnson started asking people for donations to expose McKesson but chose poorly, the language he used: 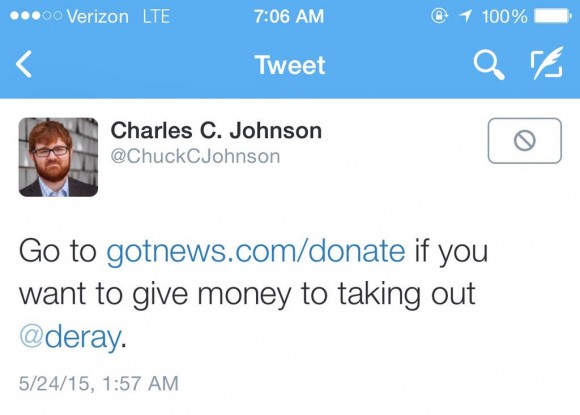 One thing people cannot say about Chuck Johnson is that he’s stupid. And only a stupid person would publicly seek out donations in order to try and kill somebody. Only somebody more stupid than that would actually believe this was a physical threat. Deray apparently thought so:

So, I woke up to this. Hate is organized in America. & yes, I take this as a serious threat. pic.twitter.com/V0zThcJJs6

Now, before we start breaking out the Kleenex for Deray over Chuck’s “threat”, it should be noted that aside from being a professional protester, McKesson is also not the sharpest knife in the drawer.

And here is one of his brilliant tweets to prove it:

The police are engaged in ethnic cleansing. America.

One could of course take some time to explain to McKesson what ethnic cleansing actually is and refer him to actual examples but that would require some semblance of reason and I suspect that I would have an easier time reasoning with a rabid bear than I would with McKesson.

Again, only somebody with nary a semblance of common sense and intelligence would believe Johnson was engaging in a real threat.

She decided to expose herself as that person lacking in common sense and intelligence by actually having McKesson on the air to talk about this. Check out the video, courtesy of Digitas Daily.

What’s so stunning about this interview is that Costello never once challenged McKesson on anything he said. Not a single time.

This was not an interview. This was Costello providing a platform for the Al Sharpton In Waiting to air his grievances and spout whatever drivel he wanted. Here are the questions she asked:

“He claims he was only speaking metaphorically. He wasn’t actually threatening your life. How do you respond to that?’

“Were there any other vitriolic tweets concerning you, previous to this one?”

“Why does this blogger……why does he so dislike you?”

That was it. Those were her questions. The “interview” lasted about 3 minutes and for nearly 2:30 of that, McKesson was allowed to talk, again with zero challenge from Costello.

That this whole thing is actually a controversy is enough to hurt somebody’s brain. This is like the equivalent of two nerds in high school hitting each other with umbrellas. CNN decided to actually invest resources in the nerd fight and then decided to allow mini-me Sharpton McKesson to give his side without challenge.

This episode should be used in journalism classes to show students three things:

1. How journalism is not supposed to work

2. How a paid protester with no credentials to speak of, can get himself on television.

3. Dark rimmed eyeglasses can make a person appear smarter, but Carol Costello is proof that they cannot hide stupidity.