Normally, I am not one to be the dour, pessimistic one as it relates to scandals that envelope Bill and Hillary Clinton. Don’t get me wrong. They’d slide in slime on their bellies to get what they wanted. Nobody in their circle is above being smeared if they get in the way and they continue to push the envelope on all matters legal and ethical because they know as much as the media will wave around the scandal flag, one of the things they’ve stopped doing is grabbing a shovel and digging.

Yet where the did media wind up on this? “Oh well, Jeb Bush deleted emails too.”

There was never any in-depth reporting on the possible security implications of what Clinton did. There was evidence shown where she responded to an email about drone strikes with an answer to a question about decorating. The media didn’t care. It was the kind of story that requires a lot of mundane work and they’re just too lazy to bother. Unless of course, the candidate is a Republican. Then they’ll go digging to find stories about GOP candidates being “bullies” in high school.

The latest is the book, “Clinton Cash: The Untold Story of How and Why Foreign Governments and Businesses Helped Make Bill and Hillary Rich,” by Peter Schweizer that purports to show  a connection between cash donated to the Clinton Foundation and actions taken by Hillary Clinton on behalf of those donors while Secretary of State. From the NY Times:

The book, a copy of which was obtained by The New York Times, asserts that foreign entities who made payments to the Clinton Foundation and to Mr. Clinton through high speaking fees received favors from Mrs. Clinton’s State Department in return.

“We will see a pattern of financial transactions involving the Clintons that occurred contemporaneous with favorable U.S. policy decisions benefiting those providing the funds,” Mr. Schweizer writes.

His examples include a free-trade agreement in Colombia that benefited a major foundation donor’s natural resource investments in the South American nation, development projects in the aftermath of the Haitian earthquake in 2010, and more than $1 million in payments to Mr. Clinton by a Canadian bank and major shareholder in the Keystone XL oil pipeline around the time the project was being debated in the State Department.

Sounds pretty seedy, right? And it is. Seedy is a perfect word to describe the world of Bill and Hillary Clinton.

The Clinton team is wasting no time in attacking the book:

A campaign spokesman, Brian Fallon, called the book part of the Republicans’ coordinated attack strategy on Mrs. Clinton “twisting previously known facts into absurd conspiracy theories,” and he said “it will not be the first work of partisan-fueled fiction about the Clintons’ record, and we know it will not be the last.”

This is just the start. Brad Woodhouse, famous Democratic hack, tweeted the following:

What kind of quid-pro-quo is this? Times, Post, Fox have exclusive agreements with the author to pursue the story lines found in the book

A cocaine dust cloud of spittle-fleck rage from Media Matters and specifically, David Brock will follow. They’ll call the book a “smear” and claim the book is filled with “lies” because team Hillary will deny any of the allegations (for the Media Matters crowd, when a Democrat is accused of something and they deny it, the accusations is labeled a “lie” because Democrats would never deny something that was true).

They will push and push this on mainstream media outlets. They’ll dig up some completely irrelevant donation somebody made to a Republican 10 years ago and how some action they took benefited the donor (look for the Koch Brothers).

Before too long, Chuck Todd will be talking about “GOP overreach”, Ron Fournier will be blabbing about how “both sides take money and act on behalf of donors” and many others in the media will be asking, “What fuels GOP anger toward the Clintons?”

Remember who we are dealing with here. The spectacle of a bunch of professional journalists chasing after Hillary’s Mystery Mobile like a gaggle of screaming teenage girls hoping to get a glimpse of a One Direction group member should give anybody pause to think they’re going to ask any hard questions. 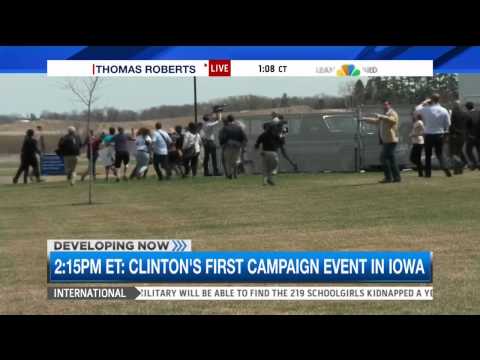 The media knows her entire Iowa trip was nothing but a giant fraud filled with hand-picked “everyday people” who are already supporters, railing against hedge fund managers when her donor base is largely made up of Wall Street investment firms and banks and behaving as if purchasing an effing burrito is actually news.

I’m an optimist at heart but I’m pretty much convinced this goes nowhere.

I hope I am wrong.