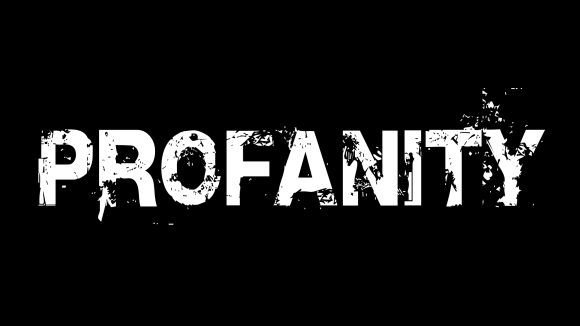 This is a family blog, and as such we don’t offer much in the way of profanity here. There is certainly a fair amount of obscenity on display, as we routinely traffic in the explicit details of the Obama administration’s feeble pretensions of governance.

We have been known to let fly with some NSFW-talk on the podcast, and every so often a scatological reference creeps into my own prose. But for the most part, we work clean.

The simple answer is that swearing, by and large, limits one’s appeal. We are conditioned from birth not to apply filthy language to everyday discourse. Taboo words are reserved for expressions of extreme emotion, and as conservatives we like to tell ourselves that we don’t operate from a position of extreme (translation: potentially reckless) emotionality. Emotions cloud judgment. Emotions render otherwise legitimate expressions suspect, especially in subjective matters. As such, we should naturally recoil from the deployment of profanity in situations which our conditioning tells us do not merit its use.

For the most part, the Internet has eroded this long-standing prohibition on all but the most necessary or flavorful of curses. In the past, when William F. Buckley would let fly with a “goddamn” it was practically a scandal – here was this archest of arch-conservatives, a Catholic, who routinely stepped right up to the line of blasphemy. Blasphemies are the truly hardcore profanities, especially if one believes in eternal consequences. While he maintained his usage did not in fact rise to that level of offense, it did accomplish the goal of being

But now, we see “f**k” and “s**t” (or quite often “f**king s**t”) used online so routinely that they’ve lost all their punch. Cursing, if done without care, gives a forum which provides otherwise insightful and entertaining analysis of current events a bit too jagged an edge for wide appeal. Not everyone enjoys the snarling.

That’s actually fine, though, if that’s who you are. If you put forward a certain demeanor, your readers presumably know what they are in for after the first few posts and come to expect it.

To the extent that a blogger is a performer, it’s just a matter of giving the people what they want.

The danger here is that when everyone rushes to the lowest common denominator, we start to sound depressingly alike. Profanity is the junk food of language, and its overuse leaves you flabby, slow, and ever-so-slightly repulsive. The cardinal sin of writing in this democratized era is to be sterile and boring, and that’s what omnipresent profanity ultimately becomes.

Allow me to provide an example.

“Barack Obama is a f**king disgrace as a President. The d*ckholes that voted for him are getting what they deserve. They can eat s**t, every s**t, all the s**t, forever.”

That certainly gets a point across. But not the sort of thing you’d want to say in front of your grandmother.

And how creative is it, really? Nothing we haven’t seen a thousand times before. Contrast:

”Barack Obama’s tenure in office has been one of unsurpassed amateurism, seeming at times a race to see which self-serving mandarin can scrape the bottom of the barrel first. I find my sympathy for his supporters (who lately have discovered just what they received for their ballot) decidedly muted. They earned this, but what keeps me awake at night is that I too am saddled with the consequence of their stupidity. Can I really call them my countrymen?”

You will note immediately that many opportunities for expansiveness are roughly curtailed by those four-letter words. Where do you go after hitting that high (or low)? Similarly, the tone conveyed in the first example is one of such intensity that it almost physically wearies the reader. And writing it? I feel markedly less intelligent for having indulged that portion of my brain.

To say nothing of the reaction from an audience which may not be immediately supportive of your worldview – confirmation bias is a plague of the Internet age, and profanity confirms a number of unfavorable impressions. How can you make the case that you’ve arrived at your beliefs through careful consideration if you call anyone who disagrees with you a f**kwit?

As I mentioned earlier, this does happen on blogs with some frequency. Let’s face it though: blogs are basically Sunday School compared to that place we (translation: I) spend far too much of my time. Where we see the breakdown of discourse most clearly is on Twitter.

For every nugget of witty, even-keeled, 140-character assessment, there is a river of profanity and extraneous punctuation to sift through, all of it seemingly acceptable to a horde of chortling simpletons using the re-tweet button as a non-verbal “hurhurhur.” I don’t claim to be pure as the driven snow when it comes to this behavior, not at all, but the perception that we are indulging the lowest common denominator has plagued me for some time.

Shouldn’t we at least try to encourage people to express themselves more articulately and less guttural? We could tie this into a general lament about the coarsening of the culture, especially on television, but it seems Bill Cosby is covering that beat – and he’s much more entertaining than I am.

Of course, all of this presumes we are seeking engagement rather than a simple reaction.

Let me repeat that I am not calling for any sort of moratorium on swearing. A well-employed curse acts as punctuation to a point, an intensifier. But it is the spice, not the meat.

We should choose what we say, and how we say it, more carefully.

Part of this is remembering words have meanings, and when we use them inappropriately we strip them of that. If you care at all about the integrity of profane expressions, as I do, then we need to stop diluting their power through tedious overuse.