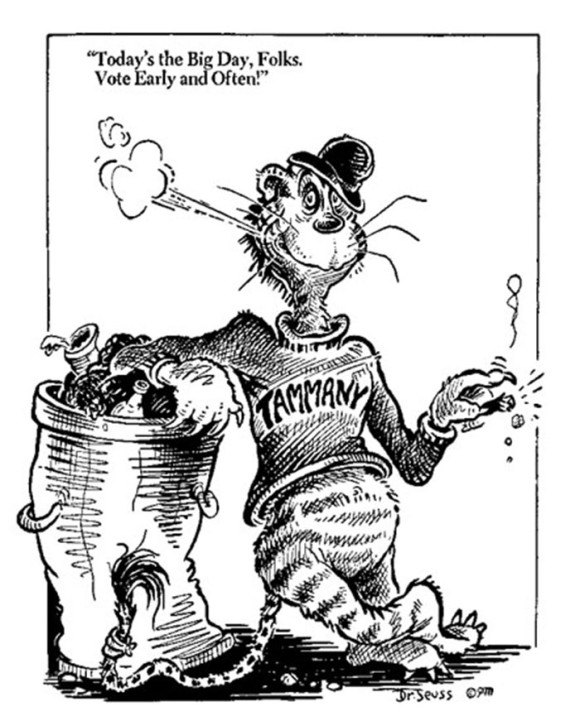 But… but… but… voter fraud is a myth!!1!  Or at least in the mind of noted subway scuba diving aficionado and reality challenged MSNBC “journalist” Toure, it is.  Let’s hop on Toure’s Unicorn and check out the myth that is voter fraud…

First up, my personal favorite – Ohio poll worker Melowese Richardson voted at least 6 times for “Mr. Obama.” Three of which were for a relative that’s been in a coma for 11 years.

Richardson, 58, of Madisonville, pleaded no contest to four counts of illegal voting – including voting three times for a relative who has been in a coma since 2003 – in exchange for prosecutors dropping four other illegal voting charges. Common Pleas Court Judge Robert Ruehlman immediately convicted her, making her a felon.

119% turned out to vote in Madison, Wisconsin. Yeah, that’s not shady at all.

A Madison City Clerk has told a Wisconsin radio host that turnout for the area is expected at over 100%, up to 119%. What makes it all the more interesting is that this story comes from a far-left site.

10 people charged with voter fraud, including a Milwaukee man that voted 5 times.

A Milwaukee man pleaded guilty Monday to illegally voting five times last year in West Milwaukee, when in fact he did not have residency there.

Brown was among 10 people charged in March with a variety of charges related to voter fraud. He is charged with voting twice in the Nov. 6 election — in person in Milwaukee on that date and by absentee ballot in West Milwaukee four days earlier.

12 were indicted in Georgia. They’re all Democrats. Shocking, I know.

Not to be outdone, in New Jersey nearly a dozen were rounded up.

Nearly a dozen of Councilman Rigo Rodriguez’s supporters, including the mother of school board vice president Wendy Guzman, have been arrested on voter fraud charges stemming from the municipal election in May, and more are expected to be nabbed this week as part of a sweeping corruption probe by state authorities, a spokesman for the Attorney General’s office said.

A review of voter registration data for ten counties in Colorado details a pattern of voter bloat inflating registration rolls to numbers larger than the total voting age population. Using publicly available voter data and comparing it to U.S. Census records reveals the ten counties having a total registration ranging between 104 to 140 percent of the respective populations.

The latest state to be added to the list is Iowa.

… Ignoring the fact that voter ID laws were declared constitutional in a 2006 Supreme Court decision written by John Paul Stevens, the Court’s then most liberal justice, Biden is continuing the fact-free assault on anti-voter fraud measures.

When such laws aren’t “hateful” they are “unnecessary.” The Brennan Center for Justice says “voter fraud is essentially irrational” so it almost never happens. Voter fraud is so rare “you’re more likely to get hit by lightning than find a case of prosecutorial voter fraud,” insists Judith Browne-Dianis, co-director of the liberal Advancement Project.

Well, the Iowa Division of Criminal Investigation disagrees. Not a state known for its hateful politics, Iowa’s DCI wrapped up its investigation this month and has referred more than 80 cases of voter fraud to county attorneys for possible prosecution. Since the investigation was initiated by GOP Secretary of State Matt Schultz a year and a half ago, five people have pleaded guilty to voter fraud and 15 others are facing charges.

All across the country are tales of voter fraud and intimidation.  There have been voter fraud convictions and prosecutions in 46 states so far.  Yep, you’re right, voter fraud is totally a myth.