Most complaints from activists within the GOP and the conservative movement about party leadership often centers around superficial nonsense such as so and so being a “RINO” or them “selling people out to the highest bidder” (and sounding like liberals in the process).

But many complaints are valid. For example, the fundraising email the GOP sent out the other day that started off, “Did you abandon the GOP?”

Some defended it saying they raised a lot of money, therefore it was effective. That’s like saying bulldozing my home is effective in order to kill a mouse. If it angers people enough they stop helping the party on the ground, then all that cash isn’t going to mean much.

One would think the GOP learned that lesson in 2012.

The RNC’s fundraising email asking volunteers and supporters why the abandoned the party clearly was a messaging nightmare and alienated grassroots supporters. But there also is an issue that many volunteers complain about: the shuffling around of campaign staffers who are subpar in their performance.

In the business world, someone causing such a public relations nightmare would be fired. In Republican circles, you’d likely find that same person just relocated to the same job in another campaign or state party.

It is almost undeniable that the GOP has a messaging problem. Even though they win the common sense argument on personal responsibility, they don’t seem to properly communicate it into soundbites that engages the average person.

Why is this? One reason may be because they keep recycling staff that can’t deliver results.

Devin O’Malley was tapped to be the Coalitions Director for the Romney campaign in Ohio in 2012. Prior to that he was a member of Ohio Senator Rob Portman’s staff. Coalitions are targeted groups that can be activated to support a candidate. For example, veterans or youth coalitions.

Several GOP operatives have told me O’Malley did little to engage people in the coalitions movement. One operative said the Romney youth coalition had wanted an Ohio state senator to head it up but the decision was made by somebody else to give O’Malley the spot. He proceeded to do nothing other than have a few conference calls. There were no meetings among the Catholic coalition as well.

After the election, O’Malley did not return Senator Portman’s staff and appeared to be without a job for approximately 8 months. He eventually landed with the Republican National Committee in New Jersey. Within six months he was able to turn that role into the Deputy Campaign Manager for Tom Cotton’s Senatorial bid (The screenshot below is from O’Malley’s LinkedIn profile) 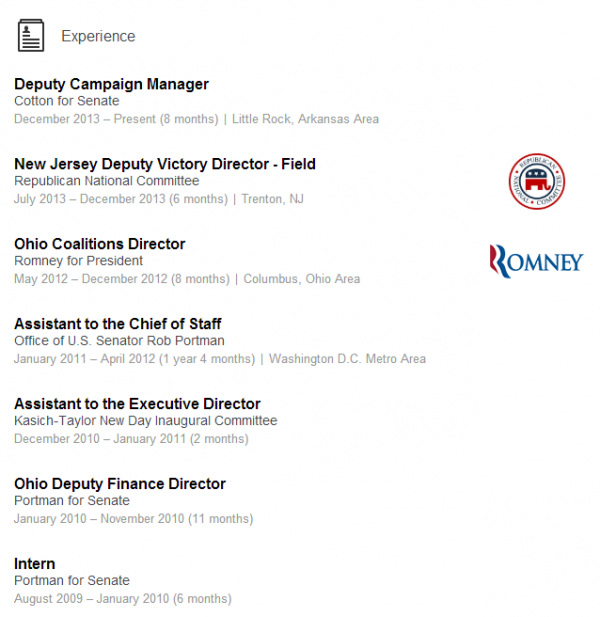 This is a critical Senate race and I have to wonder how O’Malley landed this position. This thought came to me as a I read a series of bizarre tweets between O’Malley and an editor at the Arkansas Times who runs their blog.

The first question I have to ask is this: Why would a campaign staffer, particularly the Deputy Campaign Manager, make it known his candidate did not appear at an event? That’s not information I want getting out if I were the candidate and certainly don’t want my own campaign staff making light of it.

That tweet got the attention off the blog editor at The Arkansas Times who replied:

.@ArkansasBlog @HollySales He was at the peach festival earlier in the day. Keep swinging, slugger!

@devin_omalley @HollySales that is not am answer to the question

.@ArkansasBlog @HollySales When you aren't a blogger, I'll worry about this campaign not answering your questions.

Really? Is that the level maturity Tom Cotton wants running his campaign?

O’Malley didn’t just reply. He added the period in front of the Arkansas Blog twitter name so that the rest of his followers would see what he had to say. Clever.

The other issue is, it’s obvious O’Malley doesn’t have a clue as to the influence that blogs have within media today. This is a common refrain from many 20-something campaign operatives who believe their knowledge of electioneering and activism rises above all others because they’ve worked in politics for 3-4 years. There are any number of online publications that qualify as blogs that deliver content better and more accurately than the mainstream media.

However, this raises the question (and unlike many journalists, this blogger doesn’t utilize the completely incorrect, “Begs the question.”) :

How does somebody with almost no practical campaign experience, land the number two spot in one of the most important Senate races of 2014? And how did this happen after a clearly subpar performance in Ohio for Romney in 2012?

I have heard grumbling from people who have worked on political campaigns that Republicans do two things poorly they need to be doing better:

1. Hiring more campaign staff instead of relying solely on volunteers. The disparity between Republicans and Democrats was brought to light late last year by Patrick Ruffini who wrote this report showing Democrats spend a lot more money on people that Republicans do.

2. Paying better for campaign staff. In the business world, people go out and pay the best and the brightest. In order to attract the best minds in politics, you have to pay them their value.

If Republicans are going to win in 2014 and 2016, the time has come for them to stop recycling staff that doesn’t perform and to invest more in people to have on the ground and working field operations. Ruffini nailed that point here:

At a fundamental level, the GOP has been under-investing in people across election cycles. And not just in areas like digital and data, but in the field. As the party continues its post-2012 overhaul, data like this should be important to informing strategy decisions.